David Doyle sells Thornhill House on a premium 3.4-acre site off to cousin Stewart Doyle with plans for a 42-unit scheme 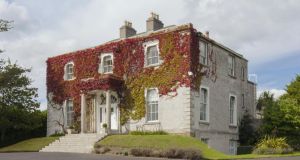 One of the south Dublin suburb’s finest and most closely watched sites, and the former family home of the late hotelier PV Doyle, the lands at Cherrygarth were quietly sold by David Doyle, son of PV Doyle, to Oak View Property Developments, headed by Stewart Doyle, a nephew of the late hotelier, and his fellow director Ray Cotter.

Oak View now plans to develop a low-density residential scheme with funding from the London-based investment manager SCIO Capital LLP. Following a protracted planning process, in which local residents strongly opposed the site’s development, permission is now in place for the construction of 42 dwellings on the site, including 33 three-, two- and one-bed apartments and nine three-storey terraced and semi-detached homes.

David Doyle acquired Thornhill from his four siblings in 2012 for €2 million – a modest sum even mid-recession – following the death of their mother, Margaret, in 2010.

A tender process will begin in the coming weeks to select a builder for the scheme, on what is the largest residential site in Mount Merrion. Oak View has indicated it plans to increase the number of apartments to 39, but the floor plan will remain unaltered and the block will be lower than in the original application. Average two-bedroom units will measure about 83.5sq m (900sq ft).

Oak View says it has further plans to restore the ivy-clad Thornhill House and existing outhouses, which will occupy a central position in the scheme. The protected Georgian mansion will remain in single residential use following restoration. The stables, dating back to the 1870s, at the rear of the main house will also be conserved and restored.

The homes will have strong ecological values, Oak View says, to reflect the natural beauty of the tree-lined site, of which a protected 200-year-old holm, or evergreen, oak will be the showpiece.

The original site was transformed in 1960 when PV and Margaret Doyle bought the house and its grounds of just over 5ha (13ac). The hotelier developed the property, constructing the Cherrygarth estate of more than 50 houses on just under 4ha (10ac) of the land.