UK interest is driving volume in these sales but, at the prime end, the US still prevails 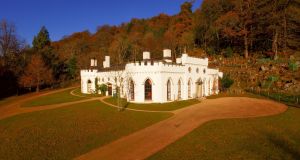 Luggala estate in Wicklow. Set on 5,000 acres, the historic property recently sold to an overseas buyer for a sum believed to be in the region of €20 million. Photograph: Bryan O’Brien

Brexit and wider global market uncertainty may have cast a pall over normal property market activity, forcing buyers and sellers into a holding position, but the country home market has seen more activity this year than last when the top sale for all of 2018 was €3.8 million for Dowdstown house in Maynooth, Co Kildare.

Already this year the upper end of the market has recorded a number of much stronger sales including most recently the historic Luggala estate on 5,000 acres in Wicklow, which has just sold to an overseas buyer for an undisclosed sum, believed to be close to €20 million. Other sales so far included Prumplestown House in Carlow where the 298-acre farm sold at auction for €4.87 million; The Fortgranite estate in Baltinglass, Co Wicklow, on 330 acres made €3 million and, close by, Pine Lodge near Blessington sold for just over its €1.25 million asking price within two weeks of launch.

With agents estimating about one in three buyers are coming from the UK, there has been a definite upsurge in interest from that quarter with their interest mainly in the core country house and second-home market. Roseanne de Vere Hunt of Sherry FitzGerald Country Homes is seeing a mix of Irish people in senior positions moving back to Ireland, but also “future buying” young couples doing well in the UK who are buying now with a view to returning once their children start secondary school. Similarly they are seeing older people changing their retirement plans and looking to Ireland, in particular if one of them is Irish.

James Meagher of Knight Frank believes the outcome of a good or bad Brexit will be very important in shaping the rest of 2019, with a portion of potential UK-based buyers holding back due to the weak pound.

James Butler of Savills takes a different view. “Buyers believe that they will be faced with greater competition once Brexit is resolved and are happy to press on with a purchase now. I anticipate the volume of prime properties coming to the market to increase once Brexit has been resolved.”

The appetite is limited for doer-uppers; properties have to be walk-in ready with contemporary upgrades

Typically most activity is in the €400,000 to €1 million sector, where there is the largest proportion of buyers. Here they are usually looking for a second home, maybe with a view to retiring there. Further up the scale, the buyer checklist tends to include a period or charming well-built house close to Dublin or Cork on land from 10 acres to 100 acres, within an hour and half of an international airport, often with secondary accommodation (for staff/guests) and water access. Savills estimates water frontage/direct access to a beach can add between 25 per cent and 50 per cent to the value of a house and almost always attracts competitive interest.

The appetite is limited for doer-uppers; properties have to be walk-in ready with contemporary upgrades while efficient broadband is increasingly becoming a deal breaker. A further bonus, Butler says, is if there is an ability to generate income from a property in particular if the property requires capital investment for renovation and redecoration.

Marcus Magnier of Colliers, who together with Ireland Sotheby’s is selling Ireland’s most expensive country estate, Abbey Leix, for €20 million, says anyone selling needs to be prepared for the long haul, especially over the next 12-18 months, with little change in already-low values.

“A huge amount of patience and perseverance is required when selling outside the main cities,” he says. He points to Ileclash House in Fermoy, which he describes as the perfect house. It was on the market for 12 months with an asking price of €3.5 million; no buyer came forward and the price was subsequently reduced to €2.75 million some months ago. This produced a trickle of possible interested parties, 50 per cent from Ireland and the balance mainly from the UK and the US. It remains for sale.

Contrast this with Pineridge Farm, near Blessington in Co Wicklow, which launched on these pages in May of this year and within two weeks sold for more than its €1.25 million asking price, to an Irish buyer. The interest for the property came from all over the world, says selling agent de Vere Hunt, and much of the attraction was lake access and excellent connectivity with Dublin and the airport.

While UK interest may be driving volume in country-home sales, at the prime end – in the €1 million-plus range – the US still prevails followed closely by the Middle East and Asia. Although David Ashmore of Ireland Sotheby’s International Realty notes a dramatic increase in interest from mainland Europe with the Old World countries of France, Germany, Austria, Switzerland, Italy and Spain being most influential.

“The extreme high temperatures recorded in many European cities over the past two summers are beginning to make Ireland desirable, certainly if combined with having a second home in sunnier climes,” says Ashmore who was joint agent with Nick Crawford on the recent sale for a reported €20 million of the historic Luggala estate in Wicklow, the biggest country estate sale in Ireland this year.

In the prime sector, the Irish country estate isn’t just competing with its neighbours or similar in the UK: buyers at this level are casting about globally for properties. “With negative deposit interest rates, the cash-rich high-net worth individuals are looking for real quality assets to invest in for pleasure and to hedge against loss of cash/monetary value, which prime property satisfies,” says Meagher of Knight Frank, who was behind the sale of the Castletown Cox estate in Kilkenny for €20 million.

Meanwhile nervous country home sellers are opting for quiet launches where photographs and brochures are prepared and then circulated to qualified buyers and new buyers coming through during autumn. If they don’t sell then they can hit the ground running for a spring launch to the open market. The only potential pitfall there is announcing your property’s arrival to the market amid a glut of springtime launches.