This small outcrop on the edge of Europe, with its reefs, promontories and blankets of bog is steeped in artistic history 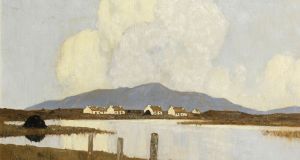 For the first time, auctioneer Morgan O’Driscoll has taken lots from his upcoming Irish and International Art Sale on tour. Having just returned from New York, the work will be on view in London this week.

The sale of 161 artworks will be held at the RDS on April 29th and includes two works – a signed lithograph and etching by Francis Bacon and four lots by Jack Butler Yeats – including Spring Tide Schull (€50,000–€70,000).

An emerging theme from the catalogue is the number of works set in the West of Ireland – particularly Connemara, by artists such as Gerard Dillon, Percy French, Nano Reid. Cecil Maguire and Maurice Canning Wilks.

This small outcrop on the edge of Europe, with its reefs and promontories surrounded by blankets of bog is steeped in literary and artistic history. Poet and playwright Oscar Wilde carved his name into a door lintel in a hunting lodge on Lough Fee in Connemara, which he described as a “savage beauty”.

WB Yeats, who had spent much time in Sligo and Co Galway, encouraged John Millington Synge to leave Paris and go to the west, which he duly did remarking: “In this ocean alone, is there not every symbol of the cosmos?”

Gerard Dillon, whose Hens in the Street, Connemara (€2,000–€3,000) features in the sale, referred to the area as “this great strange land of wonder” while Belfast-born Cecil Maguire moved to Roundstone, which has been an inspiration for much of his work. Dillon’s Lough Shindillagh, Connemara is listed with an estimate of €5,000 to €7,000.

Kenneth Webb’s Summer Poppies (€5,000–€7,000) are evocative of his remarkable garden in Clifden. The artist went so far as to establish The Irish School of Landscape Painting at his Ballinaboy studio in 1957.

Perhaps the most significant impact any artist has had on the West of Ireland is that of Paul Henry – whose billowing clouds and evocative skies reflect its perfect stillness.

Roundstone was popular with artists in the early 19th century. While George Petrie and Nano Reid were regular visitors, Maurice MacGonigal, president of the RHA loved the village so much he was buried there.

At his funeral, William Orpen’s palette was placed on his coffin, which spearheaded another artist and a student of Orpen – Letitia M Hamilton –to fall for dramatic views over Cashel Bay. Her Roundstone Harbour, is seeking €15,000–€20,000.

And while the above lots have been travelling over and back across the Atlantic, Niall Dolan will host his Spring Auction of Art and Antiques sale in Connemara, in a marquee in the village of Ballyconneely on Easter Sunday.

Incidentally, the longest running community arts festival in the country is the Clifden Community Arts Festival – now in its 42nd year. Established initially to develop the artistic skills of local schoolchildren, it has grown into an international celebration of literary, musical and visual arts.

No doubt the motto of the local school “The mind altering, alters all” echoes what has attracted so many artists, poets and dramatists to its wild and wonderful wilderness. See morganodriscoll.com, dolansart.com and clifdenartsfestival.ie

Is ‘sitting the new smoking?' How to quit the sedentary lifestyle
4

We want to build a separate granny flat. Where do we start?
6

Quitting smoking isn’t easy, but these tricks could help
9

Sake: A lesson in the Japanese drink made by steaming rice
Real news has value SUBSCRIBE