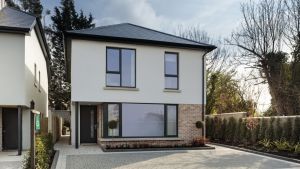 The Nurseries is a low-density development by Lioncor, in Dundrum, likely to generate plenty of local interest. The 2.3-acre site, formerly a botanical nursery, sits off the Dundrum end of Taney Road – very close to the Luas stop – and will comprise 33 three- and four-bed terraced, semi-detached and detached homes.

The location is a 10-minute walk to the shops, pubs and restaurants of Dundrum village and the bright lights of the Dundrum Town Centre shopping emporium. This is what selling estate agent Colm Byrne of Sherry FitzGerald calls the two-pint principle: the distance you have to travel to buy a pint of milk or a pint of beer.

But, despite the connectivity and vibrancy, the development is set in old-school suburbia. Birdsong fills the air.

Lioncor has partnered with architects Extend on this project, and the properties have a low-maintenance render with yellow and redbrick detailing.

The high-spec glazing completely blocks any hum from road traffic that might be audible from the nearby busy intersection of Dundrum and Churchtown roads.

The showhouse, designed by Ventura Design, is discreetly finished, allowing househunters to focus on the layout of the property without being distracted by decor, while the underfloor heating radiates upwards throughout the ground level.

Each house comes with a smart handleless Kube kitchen, Neff and Miele appliances and Silestone Carrera marble-look countertops. The four-bed units include a utility room with sink.

The bedrooms have contemporary handleless closets by Tegre Wardrobes and the bathrooms are simply clad in grey porcelain tiles.

The developer is bringing 26 of the 33 homes – mainly four-bed units – to market in this first phase, with the remaining seven due to come on-stream later this year.

They are a mix of two-storey and three-storey units, with just two three-bed terraced units within the estate measuring 105sq m (1,130sq ft) and priced from €665,000 each. In these there are two bedrooms on the first floor with a master bedroom at the top of the house. This could also be considered a second sittingroom or den for children.

Lioncor has just completed another small development in Dublin. Condor is a gated estate of five large five-bed homes on Killiney’s Church Road. Meanwhile, at Castlebrook Manor in Castletroy, Co Limerick, the first 82 of about 200 homes are under construction, and another estate is under way in Leana Theas, Knocknacarra, Co Galway. Both will be launched to the market later this spring.