Rare post box on the block in garden sale 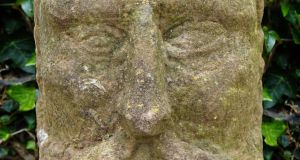 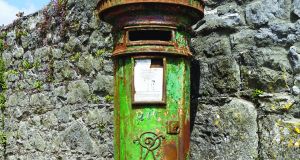 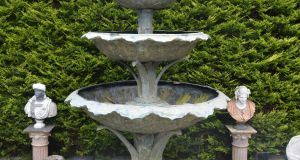 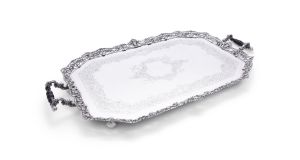 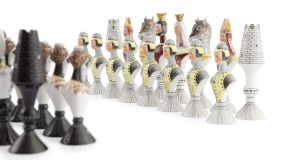 To truly appreciate ornamental garden architecture requires a backdrop other than the yard of an auction room to allow would-be buyers to see how pieces will sit within a sylvan setting.

For the forthcoming Inside Outside sale of sculpture and architectural ornaments at Sheppard’s in Durrow this Tuesday, May 28th, the auctioneers chose the nearby Glantelwe Gardens to showcase the lots which range from statement oversized pieces to modest troughs, cast-iron skillets and ceramic sinks.

Set against a backdrop of the rustling sounds of the river Erkina just outside the village, lot 518 is an enormous bronze fountain stretching to six metres in height, though the piece will require a garden of vast proportions to accommodate its stature (€15,000-€20,000) as will lot 517, an equally oversized Portland stone arch with lion mask scroll corbels (€4,000-€6,000)

An interesting piece is lot 67, an original cast-iron Post and Telegraphs pillar box that eagle-eyed catalogue watchers might recognise: it first came up for sale at Sheppard’s last May, but was withdrawn after a query by An Post. The seller had the original invoice and key as proof of purchase, so it is now appearing again after verification, according to Philip Sheppard.

Originally all postboxes were painted green and later changed to red in the 1880s. One of the first acts after Irish independence was to paint all postboxes green again.

This faded green postbox stood for more than a century on Patrick Street in Cork City, and was made by Andrew Handyside & Co in Derby, sometime between 1887 and 1901. It bears the royal insignia of Queen Victoria and comes with its original key (€6,000-€9,000).

For more modest gardens lot 49 is a treasure, a stone sculpture measuring 50cm high. Dating from the 17th century, this post-medieval sculpture of a bearded man has a real presence, and predates most houses in the country (€400-€600).

For legal aficionados, lot 62 is a set of six 19th-century Kilkenny limestone bollards with linked spiked chains, which originally framed the boundary to the courthouse on Parliament Street in Kilkenny.

The old courthouse, also known as Grace’s Old Castle, has been a seat of justice since 1792, having previously been a private residence and jail, and is one of the oldest in the country. It underwent external modifications in the past decade, whereby the old bollards have since been replaced with stainless steel counterparts (€5,000-€8,000).

Animal statues are also represented. From boxing hares to deer and lions to lurchers, and all more affordable than the price achieved for Jeff Koons’ Rabbit sculpture, purchased by hedge fund billionaire Steve Cohen for a jaw dropping $91 million at Christie’s in New York last week. The steel bunny set a new price for a living artist, selling for more than $20 million over its higher estimate.

Sheppard’s sale of 700 lots also include 100 paintings from a private collection of French art. See sheppards.ie

Adam’s on St Stephen’s Green also has some garden accessories in its At Home auction tomorrow, Sunday, May 26th. Lot 197 is a white Gothic-style cast-iron seat (€500-€700) and three pairs of Victorian cast-iron garden urns in various sizes also feature, with estimates between €700-€1,500 per set.

And if you are lucky enough to have idle afternoons to laze about in the summer sun, the sale has three antique chess sets. Lot 207 is a bone part chess set with a mahogany fold-over games box, with boards for chess, backgammon and merels.

Merels, a game also known as Nine Men’s Morris, dates back to Pre-Roman times and the design of the board was said to be sacred to the ancient Celts as a symbol of protection against evil.

These boards are found carved into the cloister seats at Canterbury Cathedral and Westminster Abbey in England, and also on a funerary tumulus slab of stone outside Bray in Co Wicklow (€500-€800).

In keeping with the religious theme of board games, lot 206 is a 1950s hand-painted porcelain chess set by Vista Alegere, depicting Christian Crusaders against North African Berbers (€300-€500).

The sale of more than 500 lots also offers an array of period furniture and French clocks.

While 2018 was the hottest summer on record for over 40 years, and weather predictions vary from a Donegal postman to the sites of spawning tadpoles, bookies have given odds of 2/1 for a very warm summer. Old Moore’s Almanac has also predicted a heatwave for 2019. Here’s hoping they are all correct so we can all dine, entertain and enjoy our outdoor spaces. See adams.ie

Dry January is for chumps. My dry pandemic has been far tougher. Just ask my wife
4

Is this the best fish chowder in the world?
5

Coronavirus: Irishwoman in Cayman Islands on living under 24-hour lockdown
8