Who owns the space between my front wall and the roadside hedge? 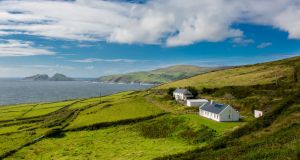 Five years ago I purchased a house in a rural area which had been built by the previous owner on a site given to him by his family on their farm. The property is registered to me and the boundary shown on the Land Registry map agrees with the perimeter wall and fence which forms the boundary to my property. However, the front wall is set back about 4m from the line of the roadside hedge. My concern is, who owns the space between my front wall and the line along which the hedge was located before being removed at construction stage?

The boundary wall set-back situation you describe is fairly typical for one-off houses constructed in rural areas. It is likely to be a condition of the planning permission. There is no formal transfer of the area outside your wall to the local authority at planning stage and it is unlikely that it has been taken-in-charge for maintenance by its roads department. You are therefore justified in your concern as the registered position indicates that the property, as registered to you, is separated from the public road. It is possible that the subject area remains registered to the previous owner in title or to his family.

It is unlikely that he retained, intentionally or otherwise, the subject area in the transfer to you

It is likely that you do own, or have a strong case for ownership of the area in question as it is likely to be contained in the deed of conveyance to you. This deed, by means of description within the deed and/or an attached deed map, will define the precise extent of the site transferred to you by your predecessor.

It should comprise the site as transferred to him by his family and would have extended to the edge of the public road. It is unlikely that he retained, intentionally or otherwise, the subject area in the transfer to you. An attempt to do so would be noted and questioned by your solicitor and confirmed by an examination of the transfer deed map by a surveyor or engineer.

You should consult your solicitor who will advise in relation to having the issue rectified in the Land Registry. Your solicitor will check the deed of conveyance in order to verify that the area in question did form part of your predecessor’s property and that it comprised part of the lands subsequently transferred to you. If the conveyance to you was based on the Land Registry folio and map, as currently registered, the rectification process may require the involvement of the house’s previous owner’s family as, in such case, they are likely to be the registered owners of the area in question.

It should be noted that the Land Registry map is indicative and not intended to be conclusive in relation to the precise location of title boundaries. However, in the event that you wish to sell your property, the issue you describe would raise questions, it would also cause delays, and be likely to require rectification before a sale could be completed.

Patrick Shine is a chartered geomatics surveyor, a chartered civil engineer and a member of the Society of Chartered Surveyors Ireland. scsi.ie

The Roscommon man who became a sumo wrestler in Japan
9