Casting our minds back to Ireland’s golden age of silver

In the boom years of the 18th-century, the Irish put their finest silverware on display 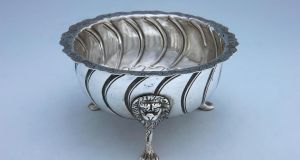 Sugar bowl circa 1755 by Jasper Johns. The Silver in Georgian Ireland Symposium is on Wednesday, May 30th, at the National Museum of Ireland, Collins Barracks, Dublin.

What sort of christening gift would be appropriate for a wealthy 18th-century baby? How did Youghal, Clonmel and several other Irish cities and towns become centres for the production of fine silver? What treasures were lost when Castlecomer House in Co Kilkenny was plundered, then burned to the ground by the United Irishmen in 1798?

These and many other questions will be examined in Dublin on Wednesday when the Irish Georgian Society, the National Museum of Ireland and Maynooth University put a major spotlight on silver. A day-long symposium at the National Museum of Ireland Collins Barracks on May 30th will see scholars from Ireland, the UK and Europe present the latest research on Irish Georgian silver; there will also be a tour of the museum’s silver galleries, which are celebrating their 21st birthday this year.

The 18th century was a boom period in Ireland, with new technologies and fashionable imports adding to the ever-increasing appetite for luxury goods. There were, however, tensions between manufacturers and retailers, as well as concerns about how British imports were impacting on the Dublin market – a subject which could hardly be more topical, given the current concerns over Brexit, and which will be explored by Alison FitzGerald from the Department of History at Maynooth University.

Sometimes just one item tells a vivid story, such as the christening cup presented by King George II to his goddaughter Lady Emily Lennox in October 1731. The baby was the second child of the king’s aide-de-camp and lord of the bedchamber, the Duke of Richmond, so modesty was out of the question: a whopping 160 ounces of silver were raised, cast and chased into an exquisite vessel by the famed Huguenot goldsmith Edward Feline.

The ornamentation on the piece includes silver lions on the lid and one handle  – these were intended to remind the child of the real-life lions in her father’s parkland menagerie at Goodwood. It must have worked because when she married James, 20th Earl of Kildare and Duke of Leinster, the grown-up Emily brought her royal present with her to Ireland – where it may have come in handy at the baptisms of some of her 19 children.

Passed down through the Kildare family, the cup acquired a silver liner in 1856, so it may have been used on the dining table for serving soup. It was purchased by the Victoria and Albert Museum in London in 2014, and its fascinating story will be retold by Tessa Murdoch, deputy keeper of sculpture, metalwork, ceramics and glass at the V&A.

In his talk on provincial Irish silver in the Georgian era, John R Bowen, master warden of the Company of Goldsmiths of Dublin, will also focus on individual pieces of silver – and the sometimes surprising places where they were created.

As the seat of the vice-regal court, it was only to be expected that Dublin would have a flourishing trade in high-quality silver.  But the increasingly prosperous middle classes in Irish towns and cities didn’t necessarily have a high opinion of the banking system at the time, so a proportion of their wealth was often held in the form of wrought plate and smaller silver items, commissioned and made locally for civic, ecclesiastical and domestic customers in Kinsale, Youghal, Waterford, Kilkenny and Clonmel.

The dazzling array of jewellery worn in 18th-century Ireland will be the subject of a presentation by Zara Power, while Damian Collins will look at the production and consumption of gold and silver boxes. There will also be talks by Bert de Munck from the University of Antwerp, who will look at hallmarks and the way in which they reveal details of skills and craftsmanship, and Jessica Cunningham, who will turn silver detective as she recreates the Countess of Ormonde’s attempts to track down her missing silver after the destruction of Castlecomer House during the 1798 rebellion.

The Silver in Georgian Ireland symposium runs from 9.30am to 5pm on May 30th. Tickets cost €125, including lunch. Details from the Irish Georgian Society’s website igs.ie

‘We have kids who can’t touch their toes’
6