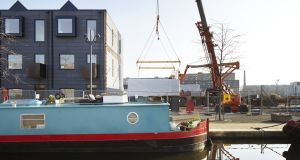 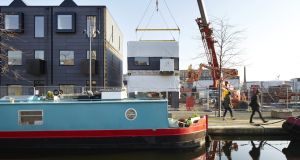 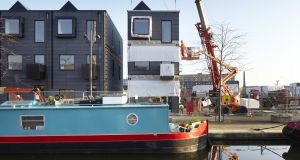 A leading UK property development group has told a Dublin conference how their booming modular portfolio has been a “game changer” for the country’s housing shortage.

And with Dublin in the throes of a housing crisis, homelessness tugging the heartstrings of the national psyche and Generation Rent scrabbling to make ends meet, the message that fast, affordable urban living is achievable couldn’t come at a better time.

In a country where the social housing policy is lagging behind demand, Ireland has become heavily reliant on the private rental and construction sectors. Urban Splash is offering an alternative - factory made homes built to a high spec, that are designed by owners and simply dropped into position on site.

The company's story started 25 years ago: two good friends in a pub, beer flowing, banter. And somewhere through the haze, entrepreneur Tom Bloxham and architect Jonathan Falkingham pondered what potential the plethora of empty buildings in the CBDs of England’s northern cities held.

Nine months later, they’d completed their first loft renovations at Concert Square in Liverpool. The layout was open-plan with high ceilings and an emphasis on original features. It was so ahead of its time that the style wouldn’t be cool for another few years. And the build cost was £27 per square foot.

They sold the apartments for £60 per square foot and Urban Splash was born.

The Concert Square project became the foundation of a property development company whose signature style is the regeneration of decaying industrial warehouses, mills and Victorian terrace houses, often in areas of low value.

Urban Splash has since delivered 5,000 residential homes and more than two million square feet of commercial property. They employ 100 people and have invested more than £1 billion in regeneration projects across the country.

Through all the growth, Urban Splash has retained its Manchester base and remained private. And innovation is still the core value.

As Britain’s housing shortage intensified through the noughties, the company’s management identified a gap in the market between the cheap redbrick urban sprawl favoured by large-scale developers and expensive bespoke homes. They began to think laterally about the country’s unmet housing needs.

“How did this come about?” asks Bloxham. “Partly because of the financial crisis, partly because [at that time] 64 per cent of buyers didn’t even consider new build housing and partly because we saw how much people enjoyed Grand Designs. And we noticed that terrace housing works very well as well. Most of our cities are terraced yet very few developers are building them.”

So they came up with hoUSe, a residential concept that delivers the “ultimate factory home”.

The design draws on the Victorian and Georgian architecture still eminently popular with buyers: two- or three-floor terraced houses with high ceilings, large windows and integrated storage. But the feel is contemporary.

Most importantly, the buyer decides on the fundamental design. They choose the floor size, devise the configuration of the rooms and determine which floor the main living area is on. The home is personal and every unit within the development is individual.

“How much space would you like?” asks Willetts. “The choice is yours.”

The timber-framed homes are entirely customisable on the interior because all of the structure is in the outside walls. Each unit is built off-site to the buyer’s specifications and construction takes 12 weeks. Two or three homes can be installed at the development per day.

A 43-unit pilot scheme in Manchester’s New Islington was completed in 2016 and is fully occupied with a planned expansion. More projects are under way in Salford, North Shields and Birmingham.

Homes by hoUSe can be built for £100 per square foot in a country where the average cost for a new build in a city centre is typically much higher. And, with between 1,000-1,500 square feet of living space, the smaller unit option is more than 25 per cent larger than the UK average for new builds.

The company has 420 units in the pipeline and is targeting a dozen more cities across the UK, including stepping into the London market where competitive pricing is critical and lateral thinking is required when acquiring sites.

As the Dublin housing market hots up, land is at a premium. Tax incentives and a growing economy mean that developers are holding onto land bought at rock bottom National Asset Management Agency prices.

The company has come up with a profit-sharing scheme for landowners, be they public or private: rather than negotiating the value of the site at the current market rate, the parties cooperate. Urban Splash funds the build and creates a livable housing solution, the homes are sold and the profits are split with the landowner at the point of sale.

By this method, Urban Splash preserves its cash for quality construction and the landowners stand to benefit from the increased land value.

According to The National Planning Framework, Ireland needs 45,000 new homes in the country’s five cities over the next three years and 550,000 across the country by 2040. But house building rates in this country remain among the lowest in the EU on a per-capita basis with only 11,500 new builds for the previous 12 month period.

Prices are exclusive of site fees and levies. The cost of the homes increase proportionally depending on how the buyer customises it. Prefer an open-plan living space? That is included in the base price, as are bespoke wall colours. Want to have a kitchen island or compartmentalise your space? Budget an extra £4,000-£8,000 (approx €4,576 - €9,100) per floor. Timber flooring is a further £3,500 per level (apprx €4,000).

Potential buyers can mix and match to create their ideal home on the company’s website before registering their interest.