Art you can try before you buy, virtually speaking 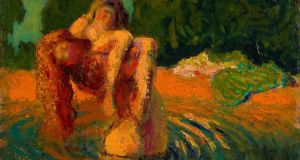 Ever wondered what a Louis le Brocquy or a Donald Teskey would look like on your wall?  Well, you don’t have to wonder any more.

A new app developed by Morgan O’Driscoll allows you to try artworks on for size – not to mention shape, colour and mood – before you bid. Just download a marker, pop it on the wall, bring up the sale catalogue on your mobile phone and: hey presto!  You’re the proud owner of a virtual Paul Henry or Jack B Yeats.

The effect is extraordinarily realistic. The first time I tried out the app, I nearly fell over as le Brocquy’s enormous Reconstructed Head of a Child suddenly materialised a couple of feet away, in all its diamond-shaped geometric glory.  It was a startling, even spooky experience.

I hastily moved to a bigger room – where I discovered that Roderic O’Conor’s Figures in a Pool would sit snugly over my fireplace, its concentric ripples of strong greens and oranges filling the room with warmth and sunshine.

“It’s just an extra image, really,” says Morgan O’Driscoll, who has had three developers working on the app since last August.

“But it gives an accurate size. On our website we already give a number of images of a painting, including the signature, the frame, and any relevant details – labels, etc – on the back. At the viewing in London, people were intrigued. So now it’s just a matter of trying to convince them to use it.”

The app, of course, isn’t just a bit of idle fun.  It was launched in time for O’Driscoll’s Irish and International Art Auction at the RDS on Monday, where the aforementioned works are among those with the highest price tags.

In their very different ways, both works show the influence of French culture on Irish painters over the course of a century. Though he is best known now for his studio nudes, O’Conor’s first nude compositions were scenes of female bathers which he painted in Brittany during the late 1890s. They were partly inspired by the landscape, then just starting to get popular with seaside holiday-makers, and partly by a personal encounter with Paul Gauguin.

Some 70 years later, Louis le Brocquy came upon a display of decorated Polynesian heads in the Musee de l’Homme in Paris: combined with his musings on Celtic philosophy, they prompted him to develop a whole new way of painting the human head by visualising it as the essence of the person, pulsing with emotions and experiences, dreams and memories.

Meath-born Letitia Marion Hamilton was also influenced by French painters. A keen traveller, she painted in various locations across Europe and her study The Flower Market in Dubrovnik (lot 14, estimate €10,000–€15,000) is full of bustle, movement and the cool, pale, luminosity of the Adriatic coast.

George Campbell, who spent much of his life in southern Spain and was an accomplished flamenco guitarist, is represented in the sale by a striking study of a string quartet (lot 43, €5,000–€7,000) while the formal, processional arrangement of William Scott’s kitchen still life, Composition from 35 Artists, is strongly reminiscent of Egyptian art  (lot 74, €4,000–€6,000).

“It’s a very special piece,” says O’Driscoll. “It was in the collection of Maurice Collis, who was a big supporter of le Brocquy in London, and it’s nearly as if it has been kept in darkness for 60 or 70 years – the condition is beautiful.”

There’s a Paul Henry (Cottages, lot 37, €50,000–€70,000) scene, with unusual pink clouds and an expanse of reed-lined water. There are also landscapes of a more contemporary hue.

John Shinnors’ enigmatic St John’s Night, Carraroe, Inishmor (lot 56, €15,000–€20,000) captures the ambivalence of the summer solstice in its portrayal of a bonfire on the cliffs, glowing in the eerie light of midsummer.

Donald Teskey is another painter who understands the power of the wild Atlantic, and his 112cm-wide Gold Rush (2004) portrays the elemental battle between water and rock with such intensity that you can almost feel the spray on your face.

At the more modest end of the price scale there’s the opportunity to acquire a Damien Hirst “spot” screen print (lot 73, €5,000–€7,000), with its bright coloured blobs on a glittery background. And as the world gears up for the glitz of a royal wedding next month, there’s a sobering reminder that life doesn’t always supply the “happy ever after”; an iconic John Minihan photograph of Lady Diana Spencer, taken in London in 1980.

“They had just found out that morning that she was going out with Prince Charles,” says Morgan O’Driscoll. “She was working in a kindergarten at the time - so John Minihan obviously got around there right away and shot that image.”  Wearing an eye-catching diaphanous skirt, the princess-to-be is accompanied by two young children - not William and Harry, of course, it’s far too early for that - which gives the silver gelatin print an odd, out-of-time poignancy. (Lot 147, €1,000 - €1,500).

Morgan O’Driscoll’s Irish and International Art Auction is at the RDS, Ballsbridge, Dublin 4 on Monday April 30th, 6pm.  Having already viewed in London and Cork it is viewing at the Minerva Suite in the RDS today and tomorrow from 11am to 6pm, and Monday from 10am to 4pm. See morganodriscoll.com