A snuff box belonging to Easter Rising leader Thomas Clarke is up for sale guiding €3,000-€5,000 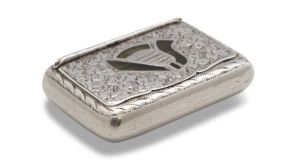 The current RTÉ television series National Treasures is showcasing everyday objects that explore the history of the island of Ireland over the past 100 years. The items are owned by members of the public, and will go on loan to an exhibition in the National Museum of Ireland.

The organisers of the project said the aim was to “form a unique crowd-sourced tapestry of modern Irish history, one that emphasises the voices of ordinary Irish people” by collecting objects and revealing the fascinating stories behind them. As they pointed out, “sometimes the simplest object can be a trigger for an amazing piece of social history, and significant cultural value can be found in the strangest items”.

While the purpose of the series is not to try to value the items in monetary terms, there is, of course, a financial side to the collecting of historical memorabilia. Auction houses have frequent – and very popular – sales of such items catering to demand from a very wide variety of collectors.

Adam’s annual History Sale – on Tuesday, April 24th, in the St Stephen’s Green saleroom in Dublin – has an array of such items, including 1916 Rising and War of Independence memorabilia.

At first glance Lot 132, a silver snuff box, decorated with an inlaid Connemara marble harp in a bed of chased and engraved shamrocks, made in Birmingham in 1903 by Joseph Cook & Son, is just a little curio and a reminder that taking snuff was a popular custom in Edwardian Dublin. But the estimate – €3,000-€5,000 – reflects its interesting provenance.

It once belonged to Tom (Thomas) Clarke, who had run a tobacconist shop in Dublin and later became one of the leaders of the Easter Rising. The snuff box is inscribed “From Hannah Clarke to Michael O’C. Maguire, the Property of Tom Clarke First President Irish Republic 1916”.

Hannah was Clarke’s sister and helped him to run the shop. Clarke was the first signatory on the Proclamation of the Irish Republic on April 18th, 1916. Adam’s said it was believed that “Clarke would have been the declared president but he refused any military rank and such honours”. Clarke was executed on May 3rd 1916.

Lot 120 is a photograph of nurse Elizabeth O’Farrell – she worked as a dispatcher during the Rising, dressed in her Cumann na mBan uniform – estimated at €3,000-€5,000. Adam’s says it “goes some way towards the act of rewriting her and many other women back into the history of the fight for Irish Independence”.

Auctioneer James O’Halloran said her “bravery went shockingly unrecognised when she was famously ‘airbrushed’ out of the photograph with Padraig Pearse as he delivered the unconditional surrender to General Lowe”.

O’Farrell had trained and worked as a midwife in Holles Street Maternity Hospital, and served in the GPO during the Rising, delivering food and ammunition to the various Irish volunteer strongholds around the city and providing medical attention to the wounded. On Saturday, April 29th, O’Farrell accompanied Pearse when he offered his unconditional surrender to the British.

Lot 130 sheds light on the preparations for the Easter Rising, and is described as “one of the rifles landed at Howth in August 1914 aboard Erskine Childers’ yacht the Asgard” – part of a tranche of weapons imported by sea from Hamburg . The Mauser cavalry carbine single-shot bolt-action rifle was, according to the catalogue note, “partially cut as means of concealment under female volunteers’ skirts as they smuggled the weapons around Dublin”, and is estimated at €5,000-€8,000.

Adam’s said: “The ‘Michael Collins’ portrait vases are known to exist in just two variations of similar design. One featuring a portrait profile of Collins to one side and Griffith to the opposing side. However, this particular lot has been modelled to an unrecorded design and features Michael Collins alone. These examples are likely to be a standalone commission requested after the death of Collins in 1922, and therefore one can assume a date of production between 1922 and the end of the [Belleek Pottery, Co Fermanagh] second period in 1926.”

These are just a few items in a sale packed with hundreds of mementoes of Irish history spanning the centuries.

The top lot, as previously announced, is Lot 67, a 15th century carved stone head described as depicting Catherine de Valois (Catherine of Valois) – estimated at €20,000-€30,000. She was queen consort of England, who outlived her husband King Henry V, and went on to have an affair with Owen Tudor, whose heirs launched the monarchy’s House of Tudor.

The carving was found in pile of rubble by the unnamed vendor in a field in Co Meath 50 years ago, and is believed to have once adorned a church at Stackallen that was demolished in 1960.

A related item is Lot 23, a collection of 16 bronze buckles dating from both the Tudor and Stuart periods (€300-€400). Each are separately identified by Chris Marshal, author of Buckles Through the Ages. According to Adam’s, “this lot offers a captivating, if admittedly niche, insight into how these simple practical items underwent a sartorial shift over the 200-year period, changing shape and design to accommodate the latest fashions”.

There’s nothing that’s not, eventually, collectible.

Adam’s has appointed Nicholas Gore Grimes as an associate director who will specialise in Irish art and 20th century design. He started his career in the art business with Adam’s in 1995, then moved to New York, where he worked at Treillage Antiques and returned to Dublin in 1999 to set up the Cross Gallery in Francis Street. Since 2014, Gore Grimes has been dealing in 20th century design. Adam’s said he would “explore and develop new projects in this specialised area” for the company.

David Britton, a director at Adam’s specialising in 20th century Irish art, is to become a consultant to the company.