Take a new Vue of Irish art at the RHA 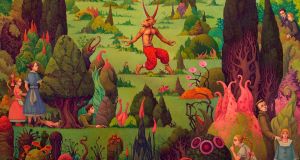 The temporary installation of a work by street artist and illustrator Joe Caslin in the Courtyard gallery at the National Gallery creates a stunning contrast to Magnus Modus: Joseph Walsh’s towering wooden sculpture.

The placement of two modern albeit contrasting works clearly indicates how contemporary pieces can feel right at home in a historic institution occupied by some of the greatest artists in history.

Vue, the National Contemporary Art Fair, which will run at the Royal Hibernian Academy (RHA) at Ely Place, Dublin, from November 7th-10th, will showcase the latest work from Ireland’s contemporary artists through the galleries that represent them.

Jack Hickey, whose work centres on photo-realism, and the social void between people of different sexes and classes, and who won the 2017 Hennessy prize, will be represented by The Doorway Gallery.

The Cork native became one of the youngest painters to have his work included in the permanent collection of the National Gallery for his portrait of the former State pathologist Dr Marie Cassidy.

His latest work, Runaway, depicting a woman’s eye in a rear-view car mirror (just like his portrait of Dr Cassidy which hangs in the National Gallery), is so true to life, that on first observation you would be forgiven for thinking you were looking at a photograph.

Quirky and thought provoking pieces by Stephen Johnson, from a body of work entitled Elements of War, navigate the grim topic of armed conflict through everyday objects. He’s represented by Gormley’s Fine Art.

Johnson has gained a reputation as one of Ireland’s most promising young artists having won a series of awards since his graduation from University of Ulster in 2011.

His work can be found in many corporate and private collections throughout the world, including a portrait which hangs in the great hall of Queen’s University in Belfast.

Cork Printmakers are the first print studio outside the capital to exhibit at Vue. The 12 artists involved will be producing a limited edition boxset portfolio of their collective work. Most, such as award-winning Sarah Roseingrave who prints on glass, use traditional technologies, with a common theme of landscapes and Cork mythology running through their work.

What appears to be a vividly coloured mythological scene in Hide and Seek in the Devil’s Garden by German-based artist and author Michael Hutter is, upon closer inspection, a fusion of fantasy and the macabre. The artist is represented by Gallery X, which, like Hutter, specialises in works ranging from the sublime to the grotesque.

Atelier Maser, representing muralists turned canvas painters, will feature “post-street art” pieces by the creator of the Repeal the Eighth mural, in addition to works by the well-known Dublin street artist Achesbest known for his U Are Alive mural on Camden Street and the Savita Halappanavar mural, which was painted at the Bernard Shaw Pub on South Richmond Street.

The Drawing on Don Quixote display at the Olivier Cornet gallery space explores the meaning of notoriety through some of the characters in the novel by Cervantes, often hailed as the first modern novel of our time.

One painting in a series by Miriam McConnon represents the character of Sancho Panza on a banknote as an historical Spanish hero, while Dulcinea In Lace depicts the character as both a duchess bride and a farm girl, woven in a lace embroidery.

The current opioid crisis and class action lawsuits against pharmaceutical giants who have manufactured the drug OxyContin in the United States are mirrored in works by Aoife Shanahan.

Pharmacist-turned fine art photographer Shanahan will make her debut at Vue with a series of OxyContin encoded photograms designed to show the destructive capabilities of the ongoing crisis. After working as a community pharmacist, she studied art in Boston and Belfast, and her work, showcased by Green On Red Gallery, is driven by a camera-less approach and a deep interest in darkroom work and analogue processes.