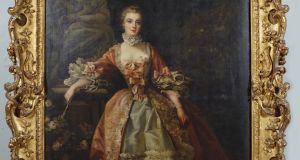 All eyes will be on lot 134 at the forthcoming Masterworks sale at Sheppard’s in Durrow on November 7th.

What is described as a “very rare and important Chinese blue and white flask” was discovered at a charity valuation in Blarney, Co Cork in September.

The sale also features two important violins owned by a professional violinist. Believed to have been made in Naples, the instruments dating from the early 1800s and 1900s are seeking €10,000-€15,000 each.

A portrait of Jean-Baptiste Lynch (1749-1835), whose father Thomas Lynch was Irish, and who went on to become mayor of Bordeaux and a count of the first French Empire, has links to the Galway Lynch family with connections around the world.

Jean-Baptiste’s mother inherited a vineyard in France which became the renowned Chateau Lynch Bages in Bordeaux, which he subsequently inherited from his father. Some wines from the vineyard also feature in the sale.

Another member of the family was Henry Blosse Lynch, a sailor in the Indian Navy, who led an expedition up the Tigris to Baghdad for the first time in navigational history. He is immortalised in present day Iran, as the old road through the Zagros mountains to Isfahan bears his name as does Lynch’s Corner, a street in Baghdad.

Ernesto Guevara, the Argentinian revolutionary more commonly known as Che, is also a descendant of the Galway tribal family. The painting of Jean-Baptiste Lynch which has never been seen in public before, came from the Derk estate in Co Limerick and is estimate at €40,000-€60,000.

An interesting painting is that of Madame de Pompadour, the official chief mistress of Louis XV, who by all accounts was an accomplished diplomat, as she also befriended his wife, the queen, and became her lady-in-waiting, while eating a diet of truffles, celery and vanilla to increase her libido (€22,000-€32,000). See sheppards.ie