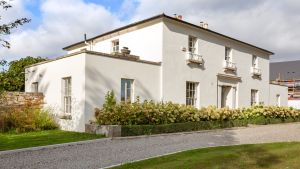 One word comes to mind to sum up East Hall a Georgian estate house on Chapel Road in Delgany, and that is charming. It is simply a charming old pile with secret gardens, stables and its own gate lodge.

One of the first occupants of the house was engineer James Boyd, a county surveyor for Clare, Limerick and subsequently Wicklow where he lived at East Hall until his death in 1853.

More recently the house – then on 5 acres – was purchased by Simon Pratt of Avoca Handweavers in 2012 for €1.03m. (Several years prior its asking price was €3.5m.) It was subsequently sold to property development company D|RES Properties for €2.053m in 2017 according to the Property Price Register.

D|RES purchased an additional adjoining five-acre site which they are now developing along with four acres from the original East Hall site. Around 70 three- to five-bed new homes are due for completion there by next year.

The company has now placed East Hall on the market with a smaller but still substantial 1.2 acre garden for €1.35million through joint agents Colliers International and McGovern Estates.

The main house was upgraded by Pratt when it was purchased in 2012. It is now bordered by a bank of white mophead hydrangea on either side of the front door, and inside the most remarkable change is that of the colour scheme – now an off white throughout – rather than the bold heritage colours used pre-2012.

This works really well as it bounces light off all the walls, acting as a neutral backdrop for the paintings currently on display, and allowing colours from the garden to permeate through tall sash windows and French doors.

An old conservatory with a rambling vine on the ceiling was converted into a dining room, where the vine, now heavy with grapes is the star attraction. This sits just off the kitchen, which has also had an upgrade along with the floors, which are now pale wide-plank oak boards.

The house still has a small conservatory located off an informal living room and overlooks a colossal fig tree laden with fruit in a cobbled courtyard.

Upstairs are five generous bedrooms arranged around a minstrel style gallery. When it was on the market in 2011 it was listed as having six bedrooms, but reconfiguration has now given some en suite bedrooms and a new family bathroom.

A large study, secondary kitchen, boot room and spacious utility are located off the rear hallway.

The photographs in this instance don’t manage to quite do justice to how lovely the actual interiors are here.

The gardens are part of the magic of the old Georgian pile. There are four distinct green areas in the form of a large paddock, a Victorian fruit and vegetable garden, a secret garden, and a formal lawn to the rear of the house. These spaces developed organically over the past 200 years and all benefit from a south westerly aspect.

Wandering through the tall maze-like hedging, which acts as a natural boundary between the gardens, it’s easy to envisage children scurrying about playing endless games of hide and seek, not to mention picking autumnal bounties from the abundant fruit trees.

A large paddock bordered by tall granite walls lies between the house and the main road, and is large enough to accommodate ponies should new owners wish to keep horses in one of the four stables.

Adjacent to the stable yard lies a cottage, which has been divided into a turf shed on one side and work area on the other. It could if needed be transformed into guest lodgings for the main property. But the fact that the sale includes a separate one bedroom gate lodge (in need of a cosmetic upgrade) extending to 60sq m (646sq ft) along with five bedrooms in the main house, there is no shortage of accommodation as it is.

One shortcoming that is immediately evident as soon as you drive past the gate lodge to the main house is the proximity and visibility of the housing development under construction over the wall. This can be easily solved by planting mature evergreen trees along the L shape where the houses are visible, and should ensure total privacy.

At €1.35m the asking price for East Hall appears to be good value given the generous size of the property, the extensive gardens, stables and gate lodge. And as for the charm, well that’s priceless.