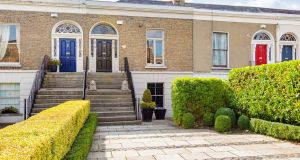 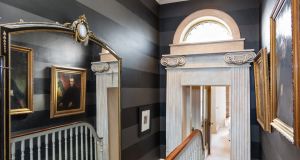 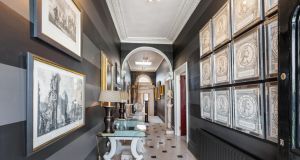 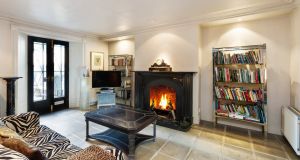 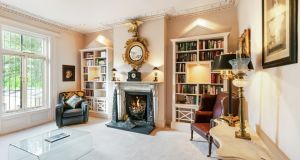 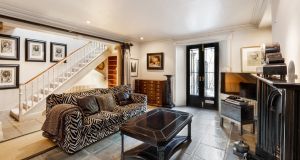 This article is 6 months old
View this property listing

With interiors going over to the dark side and black kitchens all the rage it can’t be overstated just how far ahead of the curve interior designer Patricia Downey was.

The one-time proprietor of Design Associates – Dublin’s first concept shop – at the Thomas Street end of Francis Street, who passed away recently, had an edgy sensibility that she brought to everything she purchased.

Greek and Roman busts shared plinth space while zebra-patterned sofas, wildly colourful scarves, lucite furniture, swathes of seriously expensive fabrics and some of the first pairs of Christian Louboutin shoes to ever grace these shores all formed part of the offer.

Deirdre McQuillan, fashion editor of this paper, recalls Downey returning from Paris having bought one of those first pairs. They were silk velvet pumps with hand-painted gold heels and those signature red lipstick soles that flash with every step in a come-hither fashion. Years later she recounted the tale of the purchase to the fashion designer when she interviewed him. Now rare he begged her to give them to her.

“She was visionary and way, way ahead of her time,” says Francis Street-based antique dealer Niall Mullen, from whom Downey bought several pieces. She shopped the entire street for her clients as well as travelling all across mainland Europe bringing in furniture, objects and furnishings from France, Italy and beyond and this European aesthetic is evident in her home, which is very much in keeping with her decorative style.

The shop had black walls, a look that she emulated at home in her fine villa-style house located at the upper end of Leinster Road in Dublin 6.

Set well back from the road number 109 has granite steps leading up to hall level and generous off-street parking for numerous cars. With its decorative glass panels and fanlight the front door makes a strong style statement and opens into a hall painted in wide, horizontal chalk stripes, alternating bands of black and deep anthracite grey. There is fine plasterwork overhead and a dozen prints in mirrored frames, set in rows of four, hang on the right wall. Despite the darkness a fanlight to the rear and a roof light overhead help to bring light in.

There are two rooms at entrance level. The front room, which has been used as an office but also has built-in wardrobes, could be one of the property’s three bedrooms.

To its rear is a sitting room, a bright room that takes in southern light. It has a striking over mantle mirror, decorative obelisks and a curved glass table, a maximalist mash-up of objects, bookcases and decorative elements for even though the house has been somewhat decluttered with some of Downey’s possessions sold at auction through deVeres earlier this year her signature style is evident throughout.

The master bedroom and adjoining bathroom are on the hall return.

At garden level below the layout is far less structured. The stairs down leads directly into what has been set up as a living room. In it a zebra-print sofa with paw feet sits boldly between a pair of timber pillars. A black marble fire surround makes a really strong statement. Off this room is the property’s third bedroom. While moody the rooms at this level are dark but restful.

A hall, leading to a second front entrance, under the granite steps, conceals lots of floor-to-ceiling storage, all hidden behind large silver-coloured pull ring handles. There’s a utility room and an internal bathroom.

The kitchen is housed in the original return to the rear. It is small by most family standards but the square room has appliances at hip level and a pair of butter soft leather armchairs set at a round table for two. Here is where the next owner will most likely want to transform the current set-up because the ceiling heights here are low and the aspect of the rear is south-facing.

Two sets of French windows open from the kitchen out to a flagstone patio area and there is also an opening leading through to a garden room where a Louvre-like pyramid-shaped roof light brings light into the dual aspect room. This space has the potential to open up far more to the garden.

The property extends to 188 sq m (2,024 sq ft) and there is plenty of scope to extend out subject to the usual planning requirements.

All the windows and doors to the rear are dressed in decorative black powdercoated steel grilles that offer Fort Knox-like levels of security.

One of the best features of the house is its 16.5 m/178 ft long, south-facing, back garden. This is something of a rarity in a house within a 20-minute walk of the city centre. Untouched, save for one mature pine tree, there is scope to build a sizeable mews house to the rear, complete with its own, separate, vehicular entrance on to Leinster Road East.

Built in the 1860s the house also has a curious historic 1916 connection. A Miss L Gunn who was once resident there made a claim for £10 for jewellery lost at the General Post Office, on what was then Sackville Street, to the Property Losses (Ireland) Committee (established in June 1916 to assess claims for damages to buildings and property as a result of the destruction caused by the 1916 Rising) listed in the National Archives.

The property is seeking €1.15million through agent Sherry FitzGerald.