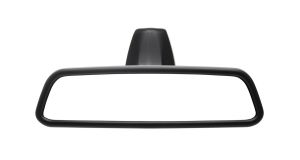 The rear view mirror or, according to US electrical engineer Elmer Berger, the ‘Cop Spotter’. Photograph: iStock

While US electrical engineer Elmer Berger (1890-1962) is usually credited with inventing the rear view mirror in 1921 – he patented it then and went on to manufacture mirrors long after carmakers had designed their own – they had been around in makeshift form for sometime before then, with a very public – and successful – use recorded in 1911 in the Indianapolis 500.

Motor racer Ray Harroun lined up at the starting line solo – a radical move as all 39 other competitors had two people up front, a driver and a second man to look backward to tell the driver what was going on behind him.

Instead, Harroun had a rear view mirror mounted on his dashboard. He won and the lightness of his car was deemed the main reason. Post-1921 as more cars took to the road, the obvious safety case for rear view mirrors increased their popularity – though as Berger called his mirror “the Cop Spotter” he may have had other factors in mind.

Ross O’Carroll-Kelly: ‘While I hate lying to him, that’s my job as a parent’
5

The Irish professor involved in introducing European animals to Australia
6

My seven-year-old son struggles to go to sleep
8