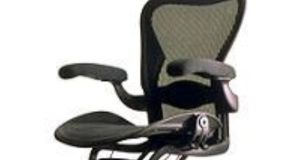 Within months of its launch in 1994 New York magazine had dubbed US manufacturer Herman Miller’s Aeron Chair the “dotcom throne”. The almost futuristic, distinctively engineered black office chair cost more than $1,000 and as a status symbol filled the cubicles of tech start-ups in Silicon Valley and beyond. It featured in photo shoots and TV series – an episode of Will & Grace centred on Will’s ambition to own one. In its first year, it was acquired by the Museum of Modern Art in New York.

Before the Aeron, the typical office chair was rigid, with foam cushioning and back support, but designers Bill Stumpf and Don Chadwick’s ergonomic creation tilted and reclined, was adjustable in many ways to suit the user, light and with casters for mobility. Its seat and back were elastic polymer mesh to support the body and let it breathe; the designers had developed the mesh for a previous chair for the elderly, the webbing created to prevent bed sores. It’s a chair designed for comfort – and long hours in the office – hence its popularity.

Herman Miller remastered the Aeron Chair – with the help of Chadwick – in 2016, being careful to update the workings of the chair with newer technology but leaving the look much the same.