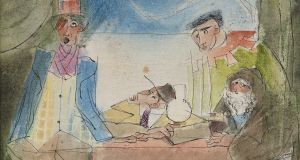 There is a Whites on the Green matchbox dating from 1987 in the Little Museum of Dublin. The tiny box – which retains its matches – serves as a reminder of the French restaurant which at one time was Dublin’s best known restaurant.

Located at 119 St Stephen’s Green, the building, designed by Richard Castells – one of the greatest architects working in Ireland in the 18th century – played host to many dignitaries and was at one point the place to be seen and dine in the capital.

The brainchild of restaurateur Peter White who purchased the fine Georgian townhouse in 1985 – and whose son Trevor is now director of the Little Museum of Dublin – the restaurant, which later became Shanahan’s on the Green, has since been purchased by The Royal College of Surgeons for a sum of around €5 million.

After the off market sale of his home on Wellington Road, and the recent death of his wife Alicia, Peter White is placing a lifetime’s collection of art and antiques for sale.

Adam’s on St Stephen’s Green will host a timed online auction that will kick off the 2021 auction house selling season in some style. The sale opens on December 20th via online bidding only and will finish on Monday January 11th 2021.

With the threat of further Covid-19 restrictions being imposed in January, Adam’s hopes to provide very limited in-person viewing at number 1 Wellington Road, all of which will be strictly by appointment.

The sale of about 350 lots comprises Irish, British and Continental paintings from the early 19th century to the present day along with some fine bronzes and prints, as well as antique furniture, china, silver and garden furniture.

Some domestic furniture and effects are also included such as comfortable sofas and kitchenalia, in the form of crockery, glassware, implements and dressers.

Leading the sale’s artworks is Louis le Brocquy’s Red Roses for Me, a pen, ink and watercolour from 1946, inspired by the eponymous Sean O’Casey play about a Dublin Protestant family against the backdrop of the 1913 Lockout. Estimated at €8,000 to €12,000, the painting illustrated the frontispiece of Frank O’Connor’s 1947 book, The Art of the Theatre which was published by Maurice Fridberg in London.

Next up from the dining room at 1 Wellington Road, and from an earlier era is the monumental and impressive oil painting by Dutch artist Remigius Van Haanen (1812-1894) which depicts an extensive landscape with a man and his dog on a road.

Works by Van Haanen, whose work features in the Rijksmuseum in Amsterdam, rarely appear at auction in this part of the world, with most of them selling at German and Dutch auction houses.

Other highlights amongst the artworks are the remarkable collection of 31 oils and watercolours by Irish artist Niccolo Caracciolo. Despite his name, Caracciolo was Irish by both birth and temperament. His father, Ferdinando Caracciolo, Prince of Cursi, was married to Mary Fitzgerald of The Island, near Waterford, which was the artist’s childhood home.

Featured works by Caracciolo – who died tragically in a car accident near Siena in 1989 – represent a wide variety of the artist’s work including landscapes and street scenes from Italy, the South of France and his native Ireland. The catalogue describes his work as “classically inspired and painterly in its execution” and estimates range from a few hundred euro for rural watercolours up to a couple of thousand euro for the Dublin city scenes, which include a view of the entrance gates to Áras an Uachtaráin in the Phoenix Park and another depicting St Stephen’s Green.

Along with a set of 14 Hepplewhite mahogany chairs with green hide seats (€3,000–€5,000) is a good selection of Georgian furniture, silver, china, Persian carpets, clocks, mirrors and lamps.

Curiosities include a very rare wood carving by Gerrard Robinson which could well attract interest from across the Irish Sea. For the Victorians who could afford them, Tyneside carver Robinson’s celebrated sideboards were top-drawer, must-have furniture showpieces.

The Laing Art Gallery staged a major exhibition of his work in 1991 to mark the centenary of his death. When he died in 1891, he was described in the Newcastle Weekly Chronicle as having been the “foremost among wood carvers of the kingdom”.

The estimate for the piece, which depicts a delighted little man dancing gleefully with cap in hand – a sentiment that hopefully we can all share at some point in 2021 – is €500–€700. adams.ie