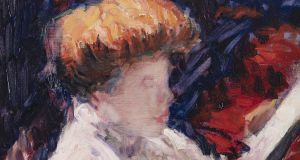 From childhood, art has captivated the collector Patrick Murphy, but it was in the early 1960s, at a Fleadh Cheoil in Enniscorthy, that his passion for collecting truly began, when he met Antoinette, a kindred spirit and fellow art lover, who would become his wife in 1964.

A career in banking, brewing and malting took the couple all over the globe, while at home Patrick has served as Chair of the Arts Council, art advisor to the Office of Public Works, and as a board member of Museum of Modern Art in New York.

He also worked on the seminal ROSC art exhibitions – events which introduced international artists, including Pablo Picasso and Roy Lichtenstein, to many Irish audiences for the first time.

Celebrating 55 years together, the couple amassed a vast portfolio of art which has been described as being “one of the most extensive and diverse collections of modern Irish painting and sculpture in existence” by art critic and curator Dr Roisin Kennedy.

The Murphys are downsizing from their recently sold Georgian home at Woodlawn in Churchtown, and have placed 200 artworks in the forthcoming eponymous sale at Adam’s on St Stephen’s Green on October 23rd.

In addition, Sotheby’s will offer 12 artworks across a number of sales in London on November 19th and 20th, Paris on December 2nd-13th, and a further sale in March 2020, to include works by international artists such as Sir Matthew Smith, Paul Jenkins, Leon Zack, the highlight of which is William Scott’s abstract, White with Black Predominating, at the London November sale.

One of Patrick’s first forays in collecting was in the 1960s when he made a successful bid of five shillings for a piece by Irish abstract artist Mainie Jellett, and promptly refused an offer multiples times that amount after the sale.

“We went to all the auctions, and I visited the Dawson Gallery almost every day while in Ireland. I spent every spare penny on art, and often went without a winter overcoat in order to buy pictures” he recalls.

While at an exhibition in London he spotted Woman Reading by Roderic O’Conor, which he describes as “a brilliant study for the similar painting in the National Gallery. I really fell for it, but had to go and ask the bank manager to give me a £30,000 overdraft over three years, which he duly did.”

Later at a dinner at the couple’s home, Basil Blackshaw remarked that he adored Woman Reading, and it was an honour to have one of his own pieces hang alongside it.

Antoinette, having studied art history at Trinity College, opened the Peppercanister Gallery along with their son Bryan in 1999. Over the years they championed several relatively underestimated figures such as Sonja Landweer, Deirdre McLoughlin, Breon O’Casey and Joseph O’Connor, all of whom are represented at the Adam’s sale.

The Adam’s catalogue reads like a compendium of important Irish artists, including works by Jack B Yeats, Paul Henry, Mainie Jellett, Evie Hone, May Guinness, Mary Swanzy, Nano Reid, Louis le Brocquy. Lesser-known artists also feature, such as Patrick Collins and Graham Gingles “who has really not been given enough credit, so his works are still reasonably priced and worth collecting.”

The couple’s astute buying has culminated in a valuable collection though Patrick insists that every piece was bought for love: “If it was purely for money we would just have bought lots of William Scott from the beginning.” The William Scott at the Sotheby’s sale on November 19th is listed with an estimate of £250,000-£350,000.

The piece that got away was at the auction of late artist Fr Jack Hanlon, whereby Patrick spotted an uncatalogued work on the floor. “The auctioneer didn’t know anything about it, and I regret to this day that I did not pursue the painting, as it was by Serge Poliakoff, who is now considered to be one of the major artists of the 20th century.

The Murphys are noted benefactors, having donated many pieces to various museums and institutions throughout the world, including over 300 works to the University of Limerick alone, where Patrick is a member of the Trustees of Self Portraits. Further works are in the collections of Trinity College Dublin, Universities of Cork and Galway, Princess Grace Museum in Monte Carlo, and the Museum of Newfoundland.

His advice for novice collectors is: “Visit galleries, go to auctions, read all the books and most importantly meet the artists.”

The couple became close friends with many of the artists who feature in their collection: “It helps to understand and appreciate their work – and essentially, as they are idealists – what they are trying to achieve”.

The Murphys are keeping 100 works by living artists. When asked if they are still collecting the response with a hearty laugh is: “But of course”

Sunny side out in tropical Sandymount semi for €1.595m
6

Róisín Ingle: How to eat out in a pandemic. Don’t do what I did
10