Cabinteely scheme to leave neighbours in the shade 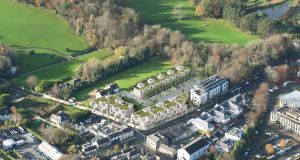 When it comes to the frequently fraught area of our planning process, it’s fair to say that both developers and local residents can be, at times, capable of generating more heat than light with their arguments for and against a proposed scheme.

In the case of one recent planning application however, the issues of heat and light quite literally came to the fore as part of an objection to the development of 34 new homes at Cabinteely village in south Dublin.

In an observation submitted to Dun Laoghaire–Rathdown County Council, one resident of the Watermint apartment scheme expressed their concern that the height and proximity of the development proposed for the adjacent site at the junction of Brennanstown Road and the Old Bray Road would have a detrimental impact on the operation of their solar heating system.

While voicing their objection in the “strongest possible terms” to the developer’s “violation of our privacy”, they added how “having lost the sunlight, our eco heating system will not work”.

Explaining this, they said: “We will not have enough light from October to January. The 79 solar panels will not be able to generate heat properly.”

Having considered this, along with 14 other submissions from local residents, Dun Laoghaire–Rathdown County Council gave its approval for the development on May 23rd last year. And while that ruling was appealed subsequently, An Bord Pleanala upheld the local authority’s decision last November.

With its planning permission now in place, the Brennanstown Co-Ownership has put the 0.55 hectare (1.36 acre) Cabinteely site on the market with Hooke & MacDonald at a guide price of €4 million.