Four-bed house on Bird Avenue is a bright, family-friendly space 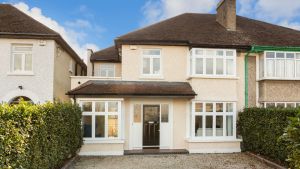 When a 1940s semi has a B3 energy rating it is a sign that not only has the house been renovated in recent years but that the work took energy efficiency into account. Number 17 Bird Avenue had a major makeover in 2008 which involved extending to the side, the rear and up into the attic and also included energy efficiency features such as double glazing and greatly improved insulation.

At ground floor, off a wide hall, are two interconnecting rooms. The one to the back opens into a covered seating space, a clever idea to maximise time in the garden. The extended eat-in kitchen is fitted with a glossy McNally kitchen with plenty of cupboards and an island with quartz worktops.

The rear of the house is south facing so this is a very bright, family-friendly space. Off this is another room – it originally would have been a garage – used as a home office but as it is off the kitchen it would make an ideal playroom if the house is bought by a young family as is likely.

Upstairs there are four bedrooms – including the one in the attic conversion – three doubles and a single. The main bedroom has a large walk-in wardrobe as well as a spacious en suite. The family bathroom was also updated during the renovation and here, as in the en suite, the fixtures are Villeroy and Boch with extensive – mostly grey – tiling.

The owners are trading up in the area and have repainted and recarpeted number 17 in advance of the sale so it is in walk-in condition for new owners.

The enclosed rear garden is south facing and the front garden has off-street parking for a couple of cars behind a sliding electric gate.

Bird Avenue links Clonskeagh Road at one end with Dundrum Road at the other, and number 17 is at the Dundrum end opposite the CUS sports pavilion and rugby grounds.