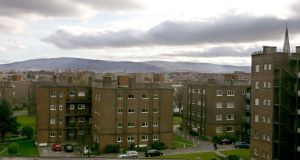 Since it was first built in the 1950s, the Mespil Estate on Sussex Road in Dublin 4 has been the subject of both fascination and obsession for investors and developers alike.

From the early days when its apartments were marketed as a modern alternative to traditional houses, to the scandal that blew up in the early 1990s when State-owned Irish Life sold 93 of the estate’s 299 units to a select group of investors which included the then Irish Nationwide chief Michael Fingleton, the then attorney general Harry Whelehan, the late RTÉ broadcaster Marian Finucane, and a solicitor acting as trustee for two daughters of then Fianna Fáil taoiseach Albert Reynolds.

While sufficient controversy surrounded the fact that the investors acquired the Mespil flats at a below market value average price of £28,000 per unit, Irish Nationwide’s provision of 100 per cent mortgages to fund the deal compounded matters, as did Irish Life’s failure to offer the Dublin 4 scheme’s tenants the option to buy their homes first.

Having come through that experience, the Mespil Estate unsurprisingly attracted interest of a different kind in the Celtic Tiger years. In 2005 and 2006, developer Garrett Kelleher quietly acquired 20-25 units at the complex from businessman Brendan Gilmore. By the time the crash came in 2008, the Shelbourne Developments chief had secured ownership of 40 of the Mespil apartments.

While a spokesperson for Mr Kelleher described the purchase at the time as a “long-term investment” as opposed to a “development play”, the combination of the Mespil Estate’s five-acre site and location immediately next to Dublin’s core central business district pointed both then and now to its incredible potential.

All of which makes it all the more intriguing to see that Urbeo Residential, the residential investment platform founded by property veterans Bill Nowlan and Frank Kenny, has in recent months quietly acquired the portfolio of 40 apartments Garrett Kelleher assembled during the boom.

While a spokesman for Urbeo declined to comment on the matter, the Irish Times understands it is now refurbishing some of the units that were vacant at the time of its acquisition, and intends to let them.

That may well be the extent of Urbeo’s plan for the Mespil Estate and, if it is, it’s certainly in keeping with its aim to assemble a large-scale portfolio of rental apartments for the mid-tier market in Dublin and the greater Dublin area.

Meanwhile, it will be interesting to see if the buyer (or buyers) of 12 other apartments sold at the Mespil Estate within the past 12 months share Urbeo’s vision for its future.

Covid’s silver lining: How Ireland has fallen headlong in love with its pets