JCD Group ramps up delivery of logistics space in Cork 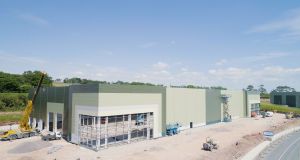 Cork-based developer, the JCD Group, is ramping up the development of logistics space at Blarney Business Park following the decision by doTerra to open its first manufacturing operation outside the United States at the scheme.

The essential oils producer intends to create up to 100 new jobs at the unit, with an investment of over €10 million on clean rooms, labs and other specialist manufacturing areas. doTerra is the second company, after ILC Dover, to locate its high-end manufacturing operations at Blarney Business Park since the JCD Group acquired the scheme in 2018.

Referring to the works now underway at Blarney, JCD’s senior portfolio manager, Denis Mulcahy, said: “We have just completed a 12,500sq ft [1,160sq m] high-quality industrial building with scope for manufacturing, office or storage and distribution, while a 60,000sq ft building is due for completion by early August. This building has six dock levellers and a clear internal height of over 12m and can be subdivided into two units of 30,000 sq ft each or a 20,000 sq ft and 40,000 sq ft unit.”

The JCD Group has also commenced site-enabling works for a 100,000sq ft high-bay facility, for which it has already secured planning permission. All units at Blarney Business Park are being developed to the latest nZEB (nearly-zero energy building) standards, and come with electric charge points for cars, natural roof lighting and highly-insulated building facades.

Located on the N20 Cork to Limerick Road at the most northerly point of the now enlarged Cork city area, the scheme is fully serviced with efficient LED lighting throughout, CCTV and security on-site, all of which is complemented by extensive landscaping and walking trails.

1 Why are markets booming when a crash is on the way?
2 How much do Irish people earn? And what will Covid-19 do to our wages?
3 Could your old car be giving away all your secrets to its new owner?
4 Dunnes Stores trials online ordering from Cornelscourt outlet
5 Permission sought for €150m film and media campus in Wicklow
6 Up to 400 jobs saved in Cavan as MML takes stake in CG Power Systems
7 Galway Clinic gets orders dismissing action over board decision
8 Covid-19: Publicans and restaurateurs row over calls for VAT cuts
9 Innovation hubs keen to get show back on the road
10 AIB U-turn on mortgage block for those on Covid wage subsidy
Real news has value SUBSCRIBE