Tycoons go large on Shrewsbury with plans in for substantial extensions 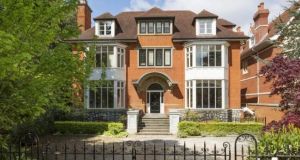 Aviation mogul Dómhnal Slattery has emerged as the buyer of the former Shrewsbury Road home of Sean Dunne and Gayle Killilea for €5.6 million. Slattery currently owns a 5,600sq ft semi-detached house on adjacent Ailesbury Road which advertised for rent and was subsequently let at €18,000 per month in December 2015.

Ouragh at 20A Shrewsbury Road is a modern six bed that went on the market through receivers in 2015 seeking €7 million. Bankrupt developer Dunne bought the site for IR£3 million from Niall O’Farrell founder of the Black Tie chain in 1999 and proceeded to pour several million euro more into the construction of the ultimate trophy home complete with ballroom, lift and party jacuzzi in the main bedroom en suite.

Slattery now plans to demolish the home’s rear façade and to make other exterior changes to transform the house, which is described as a “modern pastiche” house in his recent planning application. Ouragh currently extends to about 8,700sqft, but will be extended should planning be granted.

Meanwhile another new arrival to Shrewsbury Road, businessman Patrick Doran, is planning an even larger extension on the same road. The packaging millionaire picked up Fintragh, 11 Shrewsbury Road, for €8.45 million two months ago, having been the underbidder on Sean Dunne’s Walford last year.

The existing 5,700sqft house on 0.7 acres will be partially demolished, with new extensions to be built across four levels, including a 166sqm basement - which, in comparison with some of its neighbours, is relatively modest.

The plans break from the emerging “iceberg house” trend, whereby the majority of a home’s living space is underground, which is becoming increasingly popular in multi-million euro renovations in the locale.

During the recession, there were multiple houses for sale on Shrewsbury Road at any one time. With the sale of Ouragh and Fintragh, there is just one property left for sale on the street - the 0.9 acre former Chester Beatty Library site seeking €10 million.

While it is expected to be purchased by developers seeking to build multiple houses, for which planning permission is already in place, it is not out of the question that the site might be purchased by a wealthy individual with ambitions to own one of the largest plots on the street.

These sales came with perfectly liveable houses, however given the extent of works that have now become customary for purchasers on the street, the value often lies in homes’ sites and potential rather than their relatively small existing structures. The Chester Beatty site would especially appeal to a buyer hoping to build an ultra-modern trophy house, without the burden of having a period house in situ that would restrict design possibilities.