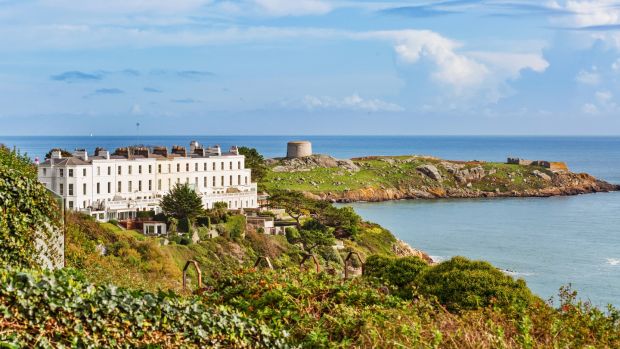 When Mary Ann Kenny’s parents bought a garden flat at the bottom of a steep flight of steps on the sea side of Vico Road, Dalkey, in the mid-1980s, they were in their early 60s. It wasn’t ideally suited to downsizers but “they weren’t going to let 20 steps stop them”, she says of her parents’ decision to fulfil their long-held dream of living in Dalkey.

The single-storey flat was small but had the hard-to-beat advantage of its own split-level garden with panoramic sea views. Bernadette, Mary Ann’s mother, lived happily there until she moved out recently.

No 5 Vico Road, a semi-detached 19th-century villa-style house, had already been divided into three apartments by the mid-1980s. Now the garden flat, a 50sq m (538sq ft) two-bed apartment in need of complete refurbishment, is for sale through Sherry FitzGerald for €595,000. It comes with a single parking space.

The apartment needs a lot of work – it has no central heating, for example – and new owners could spend up to €100,000 giving it a complete overhaul, says agent JP Condron. But sea views command top prices, and the views from Sorrento Terrace, Dalkey to Bray Head are its top selling point. One immediate neighbour, whose balcony looks into the garden, is Hawk Cliff, a completely modernised house that sold for €2.699 million in 2015.

The flat currently comprises a living/dining room with French windows opening on to the terrace outside, a small galley kitchen, shower room and two bedrooms, both with sea views. Prospective buyers are most likely to want to create a mostly open-plan space with more floor-to-ceiling windows in order to maximise those views.

The garden with views is No 5’s most attractive aspect: the good-sized terrace immediately outside the flat is laid out in flagstones with lots of potted plants.

A short flight of steep steps leads down to a second terrace bordered by a high hedge – you can’t see the Dart line below, although you can hear trains. In the corner of the lower terrace is a green garden shed with a “Shed Poets” sign on it.

Mary Ann explains that her mother, a teacher, took up painting in her retirement, then creative writing: “Every Wednesday her friends would come down to what we called The Shed Poets Society”.

Inside, the shed still has the table where the group would meet and walls lined with pictures and stories about the group.

Bernadette was widowed 15 years ago but continued to live in the flat, “embracing everything the area had to offer”. She swam in the Vico swimming place, a short walk away, into her 80s. There’s an entrance to Killiney Hill almost directly across the road, and Dalkey village is a 20-30 minute walk.

There’s side access to the back garden down a steep flight of pink steps. There are no common areas for the three apartments, but a modest service charge for common insurance and maintenance of a waste pump.