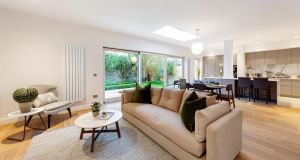 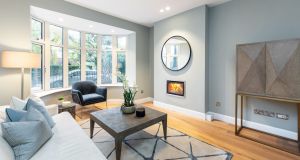 When Number 4 Eglinton Park was bought last August by Jean Feeney of Commodum Developments for €1.057 million it was a tired semi that had been divided into apartments and while spacious it was quite a shallow house, she recalls. But it had good ceiling heights, 2.7m high and a large welcoming hall.

The interior designer whose décor company is Peacock Interiors and who works as an interior consultant with MCA Architects has an eye for detail and sees opportunity where there appears to be none. She added depth by extending the living room by about 1.5m into the back of the house to make it big enough to better accommodate furniture and to create two separate rooms that interconnect via sliding pocket doors.

She further extended out into the garden by about 2.5m and designed a long, zoned family hub in a kitchen, living/dining area which extends the width of the house.

At one end is a Nolte kitchen in a soft, green-grey shade that shows off a spanking new door style and has on trend bronze-look handles on its below counter units. A large slab of ponte vecchio marble, supplied by Miller Brothers, forms the splashback. The countertops are quartz and the island has a waterfall edge and is where the sink is situated.

Hived off to its left, in what was the garage, is a good-sized guest toilet with a utility room wrapped around it in an L-shape. It’s a smart use of space and allows for plenty of extra cupboard and pantry space.

The kitchen area has 1sq m marble-look porcelain tiles from Versatile in Navan. There is a truffle oak coloured semi-solid timber floor through the rest of the room which opens out to an east-facing garden that, while not huge, feels really mature thanks to the retention of a creeper that climbs the boundary walls and mature trees.

Wall sconces from Hicken Lighting on the stairwell create interesting shadowplay and draw the eye upwards to the accommodation set around a galleried landing.

The house now has five bedrooms, four on the first floor, the smallest of which is a single, but big enough to fit a double bed while the main bedroom to the front enjoys a bow window and has a light-filled en suite where the designer sanitaryware includes Alape metal his and hers sinks and a herringbone patterned marble tile on the floor.

Feeney then made use of the large attic space to install a fifth bedroom – conforming to building regulations – with a charming bathroom set across the hall where there is slightly less ceiling height. Here, she has cleverly installed the toilet into a nook where a rooflight provides more headroom.

The house has been designed with family life in mind. Now measuring 224sq m (2,411sq ft) there is room for every member of the household to enjoy alone time as well as time together.

The location is within easy walking distance of schools and yet hidden away from the busy main street of Donnybrook.

Feeney cleverly retained some storage space within the garage, enough for bins and bikes and the front garden has been landscaped by Marion Keogh Garden Design. There is off street parking for one car with residents’ permits for more parking on the road.

The B1-rated property, which conforms to the new nZeb regulations, is seeking €1.7 million through selling agent Knight Frank.

Living on the edge: endless sea views in Skerries for €950k
9