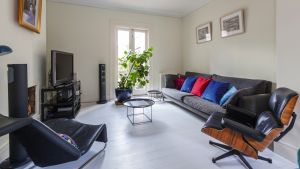 In 2014, the third highest volume of sales anywhere in Dublin city was along North Strand. Off the busy thoroughfare which connects Fairview and Clontarf to the city centre are tiny pockets of cul-de-sacs with lovely period houses ranging from two room cottages, mid-size terraced houses, all the way up to some larger family homes.

The area, having now gone under considerable gentrification, fuelled somewhat by the ongoing development in Dublin Docklands - especially at George’s Dock - is within walking distance to the city. The location is served by Connolly and Clontarf commuter stations, both of which are within a 10 minute walk of Northbrook Terrace.

Number 13 Northbrook Terrace, a charming mid-terrace redbrick, was purchased by its current owners Sandra Ellison and David Gibbons in 2007, who set about insulating the property. All the walls have since been dry-lined and insulated while underfloor insulation has also been added. The two open fires in the reception rooms to the front have not been lit since “as the house just doesn’t need it because it is so warm” says Ellison, a professional baker.

The old floorboards in these reception rooms have been painted white, which really brightens up both rooms, as does the light flooding in through the French doors in the drawing room, allowing pieces of mid-century furniture to take centre stage.

To the rear, in an extension added by previous owners, is a galley style kitchen and a breakfast room that opens to south-westerly facing courtyard sized garden.

One of the selling points, along with the updated insulation and flow of light, is the size of the two bedrooms. Both retain quaint period fireplaces and are of a generous size compared to a lot of terraced houses.

Previous owners removed what was a single box room to install a full size staircase that now leads up to the converted attic space. Currently used as an overnight guest room, the exposed red brick and large Velux windows would allow it to become a lovely home office, with ample space for filing in the part of the room under the eaves.

Ellison is in the process of setting up a new bakery in the locality to cater for the growing number of new residents, and having moved to a new home, has placed the house in turnkey condition on the market through Lisney seeking €425,000.