Twenty-four tiny pieces of heritage china are boxed up in the collector's calendar from Wedgwood; plus Naoleon in wax, a true blue sofa and Sputnik-inspired armchairs 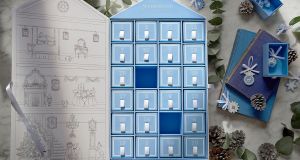 Advent calendars have come a long way since the days when children opened cardboard windows and doors to find tiny pictures of a star or a wise man inside.  Each day brought Christmas nearer and the openings got bigger until the final reveal on Christmas Eve when the Holy Family were to be discovered. It can be hard to find a traditional version nowadays; instead, windows open to reveal chocolates, trinkets, cosmetics and a whole lot more. There's a Jo Malone Advent calendar with minature scents, a Fortnum & Mason wooden version with drawers full of edible delights, numous cosmetics calendars and this blue and white box from Wedgewood that beats them all - pricewise at least.

Wedgwood’s version contains 24 miniature tree decorations in the famous “Wedgwood blue” jasperware invented by the 18th-century English potter and entrepreneur Josiah Wedgwood.  Tiny, classically decorated blue and white urns, jugs and plates are revealed in the drawers that open at the pull of a ribbon.  It's part of a wider Christmas collection also features blue and white baubles in the form of cups and saucers, jugs and teapots, all in pale blue and white. Prices range from €30–€150 for the tree ornamments. The Advent calender costs €650 and is available from Arnotts, Brown Thomas, House of Ireland, Kilkenny, Blarney Woollen Mills and House of Fraser nationwide. wedgwood.eu

Blue on blue is a trend for winter, with deep marine or navy-blue walls increasingly coming into play in living rooms, kitchens and bedrooms. This room set, designed by Catherine Denham, who leads the Home division of DFS, is a patchwork of ideas, incorporating indigo wall hangings and lengths of dipped linen. A deep, sink-in sofa is the centrepiece, while a roomy armchair is called the Cuddler for its ability to fit two. The sofa is €1,949 while the armchair is €1,246 and both are available from DFS from December 3rd. dfs.ie

The space race of the 1950s and 1960s ignited a design craze that didn’t rest until every possible household item from coffee tables to condiment holders sprouted Sputnik-style splayed legs. This pair of 1950s, upholstered armchairs would work well together in a neutral livingroom, or separately to add a splash of colour in a bedroom or luxurious bathroom. They feature in James Adam’s auction of mid-century furniture on November 19th and carry an estimate of €1,500 to €2,000 plus buyers’s premium and VAT. adams.ie

This brilliant blue bust of Napoloen is actually a candle from the French candle company Cire Trudon. Said to be oldest candle company worldwide, it was founded in 1643 and was the provider of the royal court of Louis XIV, as well as most of the great churches of France. Napoleon is matched by a candle version of Josephine in pale pink. €150 from Brown Thomas. brownthomas.com

Printmakers Jando, founded by husband and wife Julie and Owen Mc Loughlin in 2015 is now a major business that sells its colourful landmark prints in over 70 countries. Their newest print, Men’s Bathing Shelter at Bull Island comes just in time for Christmas and would make a great gift for the wild swimmer in your life. Prices start at €70 for an A3 framed print and are available on jandodesign.com.