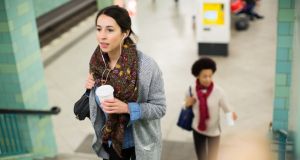 Take the stairs when you can rather than the lift

One of the biggest misconceptions around exercise is that it has to be time-consuming to be of value. We now know, however, that quite the opposite is true. You don’t need to spend hours at the gym constantly checking out how many calories you are burning. Doing so can be dispiriting and a waste of effort.

Consider these figures. By most measures, for the average person a 45-minute walk burns just about 140 calories, which equates to about half a bar of Cadbury’s Dairy Milk or a small bag of Tayto crisps.  It seems like a lot of effort for very little reward.

But the value of exercise goes far beyond the number of calories burned. In the short term, it boosts your mood and your brain. A walk before or after your meal can help digestion. It helps to keep your blood sugar levels balanced so you don’t experience cravings for a sugar or carbohydrate hit. It also serves to normalise your levels of leptin, the hormone that helps you to feel satisfied with your food, and insulin, the one responsible for putting down fat.

What impresses me the most is that it also benefits the lymphatic system, which is an important part of our immune system and plays a role in fighting infection. The heart has a pump to help keep blood circulating, but the lymphatic system does not. So we need to move, as a poorly functioning lymphatic system is a risk factor for many chronic diseases.

This all has a positive cumulative effect. It’s like putting money in the bank, though. You can’t just do it once – you have to keep adding to it to reap the rewards.

You don’t have to tog out for the local GAA team or make like Jennifer Lopez on stage. Even the mildest form of exercise, such as walking, has benefits. The key is that you must do it repeatedly. Make it a habit.

“Insufficient physical activity is a key risk factor for non-communicable diseases such as cardiovascular diseases, cancer and diabetes,” according to the World Health Organisation. It advises that adults get at least 150 minutes a week of moderate exercise, which adds up to just about 30 minutes five times a week.

Even if you don’t manage the full 30 minutes, there are benefits. A 2015 study by the National Cancer Institute and Harvard University, which had looked at the habits of 661,000 adults over a 14-year period in the US, shows a 20 per cent reduction in mortality for those taking regular moderate exercise – even though they did less than the recommended levels. Better yet, those who did one to two hours of exercise a day saw double the benefits.

So decide how you are going to add in a few more steps here and there regardless of how old you are. You might take inspiration from Ida Keeling, an American sprinter who took up running at 67 and is now 102 and still active.

Harvard- and MIT-trained physician Sara Gottfried quotes the centenarian in her book Younger as saying: “Exercise is one of the world’s greatest medicines.”

This much we know. The long-term benefits of taking exercise include reduced risk of hypertension, coronary heart disease, stroke, diabetes, depression and some cancers, such as breast cancer.

Once you have built some form of exercise into your day, try to mix it up. Unlike machines, our bodies are clever and adjust to new circumstances. If you do the same exercise all the time, it gets used to it. Better yet, if you take it up a notch you can boost your metabolism – the rate at which you burn calories – for up to 72 hours after being active.

The real message of all the research is: whatever you do, do something – because it’s worth it and so are you.

- Walk to the shops if possible.
- Or consider getting a bicycle to do so.
- Get off your bus a stop early.
- Or walk to the next stop before getting on.
- Take the stairs.
- Don’t park right next to the shop or venue you want to visit.
- Go for an after-dinner walk.
- Take a walk with a friend.
- Or catch up on phone calls while walking.