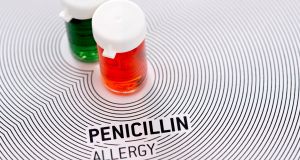 One of the most frequent medical questions in consultations is “are you allergic to any medication?” And not without reason. Administering the wrong drug to someone with a defined allergy can be life-threatening.

People with a history of suspected penicillin allergy spend more time in hospital and have poorer clinical outcomes than those without such a history. In one US study, hospital patients with a label of penicillin allergy were exposed to significantly more heavy-duty antibiotics and had higher rates of Clostridium difficile, MRSA and vancomycin-resistant enterococcus infections than matched controls.

So how is it that so many of us have been labelled allergic to penicillin when objectively this is not the case? Typically, at a young age a child will get an infection and will get a course of penicillin and then will get a rash, diarrhoea or some other mild side effect, and get labelled as penicillin allergic.

As an adult, you might not remember ever having an allergic reaction to penicillin, but that’s what your parents always told you, so you studiously answer yes to the allergy question in later life. But now research is emerging that suggests unless your symptoms were more dramatic, you may not be allergic to penicillin after all.

Doctors, too, may be fooled into thinking a person has a penicillin allergy. If they inadvertently give an antibiotic to someone with a viral illness, a subsequent skin rash brought on by the virus can be mistakenly interpreted as an allergic reaction to the antibiotic. And for patients who are diagnosed with glandular fever (infectious mononucleosis), the administration of penicillin brings out a typical rash.This usually occurs after five to nine days of antibiotic treatment, and is tan or brownish in colour. Because the shape and distribution of the rash of infectious mononucleosis plus antibiotics are similar to an allergic-type rash, they are often confused by patients and doctors.

In a recently published study in the journal Paediatrics, researchers asked some 605 parents who reported that their children were allergic to penicillin to complete an allergy questionnaire. Questions included the age of the child when diagnosed , and whether a parent, doctor or both diagnosed the condition. They were asked about 17 symptoms – ranging from a rash to throat swelling – that their child might have experienced. Separately, the doctors ranked symptoms as either “high risk” (for example swelling of the lips, throat or face) or low risk (rash, itching or hives).

Of the 597 children whose parents completed the questionnaire, nearly three-quarters had low-risk symptoms. The researchers then formally tested 100 low-risk children using a standard three-pronged approach: administering penicillin first by a skin-prick test, then by injection and orally. Interestingly, none of the 100 children tested were found to be allergic.

Much larger studies are needed before a questionnaire alone could be used to identify patients labelled as allergic who could safely take penicillin. But the research is definitely a step forward in reducing incorrectly labelled penicillin allergy.