Cadaver skin and plastic surgery: How the White Island survivors are being treated 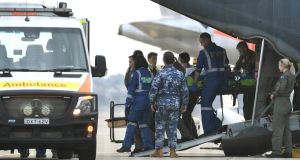 Although we were, thankfully, spared images of severely burnt victims, last month’s major burns event in New Zealand gripped the world. The Whakaari, or White Island, volcano, in the Bay of Plenty, was known to be active, but tourists were brought there regularly to walk inside the crater. On December 9th the volcano erupted while a group of tourists were inside. At least 17 of the 47 people on the island at the time have died. The remainder are being treated in specialist burn units in New Zealand and Australia.

The skin is very much a living organ; it is , in fact, the largest in the human body, with a surface area of nearly 2sq m. As well as protecting us, it plays a key role in the regulation of body temperature.

The extensive burns caused by the White Island incident were the result of a sudden, enormous transfer of energy. Burns from external heat sources that raise the temperature of the skin and tissues, and cause tissue-cell death or charring, are called thermal burns. Hot metals, scalding liquids, steam and flames are common sources for this type of burn.

A severe burn is devastating, both physically and emotionally. People with severe burns may be left with a loss of physical function, disfigurement, loss of a limb, scarring and infection

Burns are classified as first-, second-, or third-degree, depending on how deeply and severely they penetrate the skin. First-degree, or superficial, burns affect only the epidermis, or outer layer of skin. The burn site is red, painful and dry, but with no blisters; mild sunburn is a typical example. Long-term tissue damage is rare and usually consists of an increase or decrease in skin colour.

Second-degree burns involve the epidermis and part of the dermis layer of skin. The burn site appears red and blistered, and may be swollen and painful.

Third-degree, or full-thickness, burns destroy the epidermis and dermis. Third-degree burns may also damage the underlying bones, muscles and tendons. The burn site appears white or charred. There is no sensation in the area, as the nerve endings have been destroyed.

In general, burns affecting 10 per cent of a child’s body or 15 to 20 per cent of an adult’s body are considered to be major injuries that require hospitalisation and extensive rehabilitation.

A severe burn is a devastating injury, both physically and emotionally. People with severe burns may be left with a loss of physical function, disfigurement, loss of a limb, scarring and infection.

Initial treatment is intense. The patient with burns goes to theatre, where they are cleaned and a start is made on removing the wounded skin, a process called debridement. Plastic surgeons, intensive-care specialists and a range of other experts, from occupational therapists to psychologists, swing into action to begin a months-long rehabilitation effort.

One New Zealand plastic surgeon, Michelle Locke, told Radio New Zealand that “some of the challenges we have with the major burns is that they don’t have enough unburnt skin for us to graft them straight away”.

To fill the immediate treatment gap, millions of dollars’ worth of donated cadaver skin has been ordered from the United States and Australia.

“The cadaver skin is only temporary, because it’s not matched to the patient. In the same way you couldn’t do an organ donation to someone who wasn’t matched to you, you can’t put someone else’s skin on it and leave it on forever,” Dr Locke noted. The cadaver skin is therefore used as a biological dressing, and is usually left in place for up to two weeks.

It’s draining work. Theatre sessions run from 8am to midnight. Deirdre Seoighe, an Irish plastic surgeon based in Waikato, just across North Island from the Bay of Plenty, immediately came off maternity leave to help out. Waves of specialists from abroad have travelled to relieve exhausted colleagues. But it’s the patients and their families who face the toughest marathon to recovery.