Switch on the magic of motivation

Whether it’s getting good grades, flying model airplanes or just having a cup of tea in peace, keep that motivation bubbling along 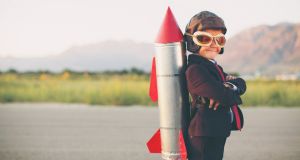 Whether you go to wrestling shows, meditate, dress up in drag, study for a PhD, pound the pavements in your running shoes, turn cartwheels, write poetry or pretend to be Batman, you are connecting with the power of motivation. Photograph: iStock

If you go to the park at the weekends you might see grown men out flying model airplanes. What do they get out of it? Probably a combination of fun, belonging (with others who have similar interests), achievement and freedom from the daily routine. The latter, according to the late Dr William Glasser’s Choice Theory, are our basic human psychological needs.

Suppose on the same day other people are getting grinds to help them do well at college? If you scoff at the model airplane guys, perhaps you might nod approvingly at the swots?

Both, though, are examples of the power, the magic if you like, of motivation.

In an overheard conversation in a cafe, I heard a couple complaining to companions about their son’s lack of motivation. “All he wants to do,” his father said ruefully, “is to play games on his computer.” His mother added: “He can spend hours and hours but ask him to do anything else . . .” At least, I said to myself, he’s highly motivated to play games.

For parents, especially, lack of motivation in young people can can be disturbing.

It may just be, though, that they haven’t yet found the thing that will drive them forward strongly. That “thing” could be a goal or career suggested by someone other than their parents. A suggestion to, say, study music or game design can seem plain silly coming from one’s parents – who, after all, don’t know anything – but like a brilliant jewel of inspiration from an admired person from outside the family nest.

A new setting can switch on the motivation too. A person steps into university, loves the greater independence of study and choice the university represents and finds their motivation surging. Or – this was often noted by families and friends in the old days – a person emigrates and, for the first time in his or her life, works hard and develops an ambition to get on.

At the other end of the age scale, consider motivation and dementia. Swiss research suggests that people who are good at setting goals and are highly motivated to achieve them are less likely to develop dementia. One study found that people with mild cognitive impairments that can (but don’t have to) be precursors of more serious dementias are less likely to progress to the serious stage if they are very motivated people.

Much more research is needed to tell us what is going on here. Is the motivation a result of a personality trait that also protects against dementia? Or is motivation in itself a protective factor?

If the latter, maybe we need to value motivation in itself and not just judge it by the importance it has in the eyes of, well, whoever it is that gets to tell us what’s important in life.

So whether you go to wrestling shows, meditate, dress up in drag, study for a PhD, pound the pavements in your running shoes, turn cartwheels, write poetry or pretend to be Batman, you are connecting with the power of motivation.

If you’re feeling demotivated, take a look at that list I mentioned at the start: achievement, belonging, fun, freedom. Are you missing one of these more than any other and can you do something to get some of it? That ‘something’ can be big or small.

For instance, freedom, for some, means sailing around the world – I’m thinking of Tibby and Claudia, an Irish/Romanian couple who are doing just that with their children Thea and David and who, last time I looked at their Voyagers Under Sail Facebook page, had dropped into Morocco to take some camels for a walk.

But freedom might also be half an hour by yourself in a coffee shop, gardening, staying in bed until 11 on a Sunday, or reading The Irish Times without interruption from man, woman or beast.

What really matters is keeping that motivation bubbling along. It’s like having the electricity running even when all you want to do with it is make a cup of tea.

– Padraig O’Morain (@PadraigOMorain, pomorain@yahoo.com) is accredited by the Irish Association for Counselling and Psychotherapy. His latest book is Kindfulness. His daily mindfulness reminder is free by email