Being alert to the risks of falsified and substandard medicines 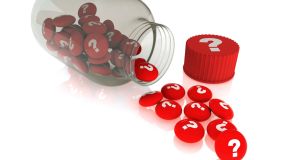 Most of us would never consider the possibility that the medicines we take might be fake or substandard, yet about 10 per cent of medicines worldwide are falsified and this figure rises to 70 per cent of all pharmaceuticals in some countries.

It is currently estimated that one-third of malaria medicines used in east Asia and sub-Saharan Africa are fraudulent. A 2015 report of 17,000 drug samples – including anti-malarials, anti-tuberculosis medicines and antibiotics – found that up to 41 per cent failed to meet quality standards.

In Ireland, almost one million counterfeit or sub-standard medicines were seized in 2017. Of these, 47 per cent were anabolic steroids, 23 per cent were sedatives and 13 per cent were medicines for erectile dysfunction. Many of these medicines, which were intercepted before reaching their destination address, didn’t contain the labelled active ingredient.

“National and international collaboration and sharing information is a crucial factor in successfully curtailing exploitation and protecting our citizens from dubious or substandard products,” says Lorraine Nolan, chief executive of the Health Products Regulatory Authority (HPRA).

Substandard or falsified medicines not only can have a tragic impact on individual patients and their families, but they are also a threat to antimicrobial resistance, adding to the worrying trend of medicines losing their power to treat. The global sales of counterfeit medicines rose to €57 billion in 2010, double what it was in 2005.

Emer Cooke, head of regulation of medicines and other health technologies at the World Health Organisation (WHO), says that to reduce falsified medicines, regulators need to have control of supply chains and knowledge where products – and ingredients – are coming from and going to. “The greatest risk of diversion is in the last mile before products get to the patients. We need trained regulators who are aware of the possibility and risk of substandard and falsified medicines and enforcement officers who look closely at the distribution chain,” she explains.

In 2013, the WHO introduced a global surveillance and monitoring system for substandard and falsified products. Since then, many countries now report suspicious medicines, vaccines and medical devices.

Cooke says the core issue is that regulatory systems are built to manage legal medicines. “You need different skills to catch the illegal medicines and penalties for substandard and falsified medicines are less than those for illicit drugs. We need governments to be aware of this problem and those who distribute falsified medicines need to know that they are likely to get caught,” she says. A report from the United Nations Office on Drugs and Crime in 2013 stated that in West Africa, fraudulent medicines may pose a greater threat to public safety than illicit drugs.

According to Cooke, patients also have a role to play in identifying counterfeit medicines. “Sophisticated operators will copy the packaging of the genuine medicine but it might be in a different colour packaging or there might be a spelling mistake in the name of the drug,” says Cooke, who was in Dublin in September for the for the International Conference of Drug Regulatory Authorities.

The biggest threat of falsified medicines in Europe comes from purchasing medicines or dietary supplements from online pharmacies. Counterfeit medicines for the treatment of high cholesterol, erectile dysfunction, HIV-Aids and anti-cancer and weight-loss drugs are among those that can be found online. Counterfeit contact lenses, pregnancy tests, condoms and breast implants are among the medical devices available online. Patients are particularly vulnerable if the medicines they require are costly in their own country but available at a cheaper price from online pharmacies.

“Online pharmacies operating in Europe must display the common EU logo which is regulated by the Pharmaceutical Society of Ireland. On a genuine online pharmacy website, if you click on the logo, you will be directed to the regulator’s site to confirm this,” he explains. However, when we checked, we couldn’t even find the logo – usually displayed as the country’s national flag – on some online pharmacies operating in Ireland.

In Europe, medicines and all starting materials, active ingredients, synthesis, intermediates, accessories and packaging used must meet high quality standards established by the European Pharmacopoeia. All legitimate manufacturers apply these quality standards and are regularly inspected or audited to ensure compliance. All medicines and medical devices also undergo a range of tests to ensure they are safe and effective before they are launched on the market.

“The HPRA’s primary concern is the health of patients and we consistently advise the public not to purchase prescription medicines online as there can be no guarantee as to their safety, quality or efficacy,” says a spokesperson for the HPRA.

In 2017, the HPRA, with the Revenue’s Customs Service and An Garda Síochána, detained more than 200,000 dosage units of illegal prescription medicines valued at more than €850,000. Coordinated by Interpol and known as Operation Pangea X, this resulted in two arrests, the investigation of 38 websites and eight social media pages being taken offline.

In parts of Africa, street markets are the most likely places where falsified medicines are for sale. Countries with a higher incidence of substandard and falsified medicines often also don’t have appropriate product registration, laboratories to test for quality or high levels of surveillance and enforcement to remove counterfeit products from the market.

This year, a new campaign on the right to safe, quality medicines entitled “Medicines We Can Trust: A Call to Safeguard Quality” was launched. Regulators around the world hope this will be another step in their efforts to combat the illegal market for falsified and substandard medicines around the world.

The Irish Medicines Verification Organisation (IMVO), a not-for-profit organisation, was set up in 2017 by pharmaceutical manufacturers, wholesalers, distributors and community pharmacists as part of an EU-wide series of measures to tackle the growing problem of fake or ‘falsified’ medicines.

Next year, new EU legislation will require all prescription medicine packs to carry a special barcode containing a serial number and other details which will be used to check that the pack is legitimate. Before supplying the medicine to a patient, the pharmacist will scan the barcode to check the data against a central database managed by IMVO. If the pack details are not found in the database, an alert will be generated and an investigation will take place to find out if the pack is fake. The pharmacist will issue the patient with another medicine if this occurs.

Some community pharmacies in Ireland are currently testing the software for this new system as part of a pilot programme before it is introduced in full in February 2019.