Helping to deliver support and guidance to mothers with sick babies 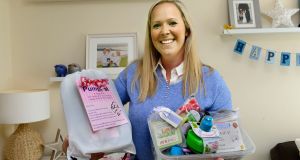 Jan Martin with her PumpPal kit for women with newborn babies in hospital. A Coombe Hospital NICU fundraiser for PumpPal will be held at the Gathering Grounds, Kilternan, on Friday, October 4th from 10.30am-12.30pm. Speakers include Jen Hogan, columnist with The Irish Times; Dr Anne Doolan, consultant neonatologist at Coombe Women’s Hospital; and Cathy Monaghan, paediatric dietican. Photograph: Cyril Byrne

When Jan Martin’s son was rushed into heart surgery just two days after he was born, she presumed she would have to stop breastfeeding.

“I had no idea a newborn baby could have heart surgery, I really thought he was going to die. When a nurse mentioned after the surgery that I’d be able to feed again I thought she must be crazy. My baby was sick and I thought that even if he survived I wouldn’t be able to breastfeed him.”

The nurses at Our Lady’s Children’s Hospital in Crumlin suggested Martin use a breast pump while baby Caleb was recovering. “I had breastfed my first son but using a pump is completely different – it’s like milking a cow. You put it on each breast and you pump. It’s very mechanical and it’s nothing like breastfeeding. A lot of mums would feel terrified.”

Martin was introduced to the hospital’s “breastfeeding champions”, who were nurses specially trained in supporting new mothers while their baby was sick in hospital. This included teaching mothers how to use the hospital’s breast pumping equipment to express milk.

“It was completely alien to me, I didn’t have a clue what I was doing,” says Martin. “Without the breastfeeding champions I don’t think I could have learned as quickly.”

Despite the guidance and support from staff, Martin still felt overwhelmed by the pumping. “You’re heavily dependent on the staff and they’re focused on keeping your child alive. It’s very challenging to get through it on your own.”

Martin often encountered other mothers queuing up to use the expressing room where they could pump the milk from their breasts. “When you’re in there you feel very isolated and alone. You feel like you’re the only person expressing. I was really surprised when I opened the fridge and saw so many bottles of milk there from other mothers.”

Without the support of her family in Dublin, Martin feels she never could have made it through the 12 days her son spent in hospital.

Six months after the ordeal, she began reflecting on what extra steps could be taken to help mothers of sick newborn babies who might not have family nearby and came up with the idea of creating ‘PumpPal’ kits.

The kits include an information leaflet on how to express milk using a pump; a breast pump cleaning brush; a reusable water bottle; a sterilising bag; toiletries; a mug and spoon; some porridge oats so mothers can prepare themselves a healthy snack; as well as an eye mask and ear plugs, says Martin. “You need to have a baby around you for the body to be able to make milk so there’s a little photo key ring. It’s helpful to have a photo of them with you when you need to express.”

Martin contacted the staff at Crumlin and offered to run a six-month trial of the kits, which cost €25 each to make. She fundraised €5,000 through coffee mornings, the mini marathon and donations and has prepared and delivered 200 boxes to the hospital over the summer.

Martin initially planned to finish up once she completed the second batch of kits but says messages of gratitude from mums has prompted her to keep going and hopes to secure the funding needed to continue the PumpPal project.

“I want mums who are going through what I went through to feel less alone and isolated. I want to give them the comfort of knowing that somebody has been through this before and people want to help you get through it.”