Penetrating power of the story in medicine, as in life, cannot be underestimated 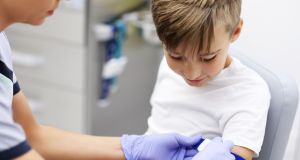 The ‘story’ is recounted in short, simple phrases that follow a logical sequence and is clear enough that those with mild learning difficulties can also understand it. File photograph: Getty

Today’s data-saturated output of evidence-based medical science invites the inference that the “art of medicine” is in temporary abeyance. So, it is refreshing that central to a recent Irish ground-breaking medical innovation undertaken at Galway University Hospital’s Department of Paediatrics is . . . a story.

Few of us look forward to hospital visits, and the prospect of giving a blood sample (phlebotomy) can fuel one’s apprehension. However, for those with heightened sensations – like those with autism spectrum disorders (ASDs) – the problem can be magnified. ASDs are a group of life-long neurodevelopmental disorders characterised by impaired social interaction and communication; a recent Department of Health report estimated the prevalence of ASDs in Ireland at 1-1.5 per cent.

Paediatric specialist registrars Drs Claire Connellan and Lisa Dann – along with consultant Dr Orla Flanagan – note in the journal Archives of Disease in Childhood: “Children can find hospitals and procedures stressful. This is particularly true for children with intellectual disabilities or ASD. These children can find phlebotomy distressing and often need repeated testing due to medications and screening tests for associated diseases.” Dr Connellan explained to The Irish Times the background to their study: “We found that we were unsuccessful with drawing blood in a certain cohort of children who were becoming very distressed, so we began using medications such as midazolam for light sedation.”

This approach causes a little sleepiness or drowsiness and relaxation, but Dr Connellan’s team found that “the more we used it, the more it made us reflect on using other strategies. Anyone working with children with ASD will know that visual schedules and stories work well to lessen stress and we know that the unknown or unplanned is particularly distressing.”

And it was the clever application of this knowledge that provided the solution to the problem they had identified. At its core is the concept of social stories, first developed in 1990 by a United States teacher Carol Gray, who describes social stories as social learning tools that support the safe and meaningful exchange of information between parents, professionals, and people of all ages with ASD.

The impetus for the Galway study arose when a parent approached Dr Connellan’s team about using social stories to help address the challenge of phlebotomy. “The story,” explains Connellan, “is in short, simple phrases that follow a logical sequence and is simple enough that those with mild learning difficulties can also understand it. It brings the child step by step through the process with visual aids.”

Connellan’s team selected 10 children with ASD who had previously been distressed or needed sedation prior to blood being taken. The social story the paediatricians used was a five-page picture document, explaining what would happen. “For example,” says Connellan, “showing the main entrance door, the waiting room, the consultation room and pictures of the nurse and doctor. This is accompanied with short explanations like: ‘we will sit in the waiting room until it’s time for our appointment’ or ‘when it’s our turn we go to the exam room’.”

The social story was paired with a phlebotomy pack, minus needle, – assembled by community nurse Phil Noone – and parents and children practiced with both before returning one or two weeks later. “We felt,” Connellan points out, “this was important as it gives an element of control back to both parent and child”.

The experiment was successful, with nine out of 10 patients providing a blood sample without needing sedation. Parental comments included “a fantastic improvement” and “without a doubt we would use it again”. The study authors’ report states in relation to social stories: “There is a paucity of evidence behind their use, with no published reports on their use in phlebotomy. We have used it on a limited number of patients but with remarkable success.”

Deputy executive director of the Irish Society for Autism Tara Matthews said: “The Irish Society for Autism have found that social stories can be an invaluable tool to some people with autism and familiarisation with situations can dramatically reduce levels of anxiety. It is very encouraging to hear that this work is taking place and hope that many other areas will adopt this approach for children and adults with autism who may benefit.”

She adds: “We realise that this approach is all about planning, practice and familiarising the child with what is going to happen and all of that takes time, both at home and in the clinic. So it’s not applicable to all aspects of healthcare that a child with ASD will encounter, such as visiting the emergency department. But although it was only a small number of patients, it made such a difference to those children and parents that it’s worthwhile taking the time, if possible”

The power of the story in medicine, as in life, cannot be underestimated.

Steal a pig in Tipperary in 1841? You could be shipped off to Australia
4

‘We would go back in a heartbeat’: Readers share their best family holidays
8