Baptism of fire for competitors in ‘Superstars’ style games 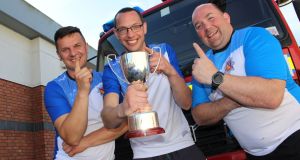 When Cahir firefighter Jim Halpin pulled up a chair beside Chief Fire Officer for Tipperary Dave Carroll, he wanted to talk about Superstars – the old RTÉ tv programme in which Irish athletes competed in various events. It brought back memories of watching Pat Spillane, Bernard Brogan and Gerry Loftus doing chin-ups and shooting hoops.

“Instantly, I thought it was a great idea,” says Carroll. “We took the idea and made it for firefighters – so the events included pulling a fire engine, climbing a tower, hanging tough, and even some mental challenges.” Some of the activities would have to be done while wearing full fire-fighting equipment.

And so the idea for the Setanta Fire Service Games was born – with the inaugural event taking place in Thurles Fire Station at the weekend.

The games were a culmination of a physical and mental wellbeing programme which was rolled out over the past 18 months, with 11 firefighters completing diplomas in Personal Training, and Strength and Conditioning.

“We’d be very much into health and safety, but it was always the safety bit,” says Carroll, “so, about two years ago we started looking at the health bit. We spoke with Setanta College in Thurles and (founder) Dr Liam Hennessy. ”

We have our winner! The Cup stays on home soil! Thurles crowned Tipperary's Fittest Firefighters & keep the Setanta Cup! Congratulations to Marc, Nigel & Rafal. A close competition, well done runners up, Nenagh 👏 Huge thanks to @TipperaryFire on a fantastic event. @helloalicepr pic.twitter.com/aB2Cln5Fay

The firefighters who completed the diplomas are now designated wellness officers in their respective stations. “So these officers are bringing their knowledge back to their stations, and helping the individual firefighters there. There’s also nutrition advice and mental health. We’re trying to build a whole awareness around health – because what firefighters do is very tough.

“We have about 55 vehicles in the county. They are very expensive, and we have two full-time mechanics spending a lot of time on them. We needed to look for some preventative maintenance on our most valuable asset – the firefighters.”

Firefighters in Tipperary, like most parts of the country are not in their stations waiting for a bell to sound. Most have full-time jobs outside the fire service. It makes the health and fitness programme all the more important, according to Carroll.

“All our firefighters are retained, so they can be at home at midnight, or 3am, and get a call – they are out of bed and in the station in five minutes. So they can be going from a very static, resting stage to full-on activity. So this programme is part of that. They need to be fit, and they are.”

The competition between the county’s 12 fire stations – which has a total of 130 firefighters – proved popular, and Carroll hopes other stations around the country will take notice and consider getting involved. “It’s easy to lose momentum, so the games will hopefully be an annual event. The competition is fierce, it’s really taken off. Our plan hopefully is to open it out for next year, and bring teams in from outside (the county). Maybe even a bit of intercounty competition – Tipp v Kilkenny v Cork.”

A few years ago Carroll – who joined the fire service 25 years ago and is chief in Tipperary for 18 years – couldn’t have imagined he’d be competing in a such a physical event.

“In January, 2017 I had a stroke. Two strokes. I would have been reasonably fit, but I had an undiagnosed hole in my heart since birth. It had gone unchecked for 45 years.

“I was out of work for six months, but I’m fine now. I call it a stroke of good luck, Certainly, I would have been in trouble if they hadn’t found it. So, at the time, I wouldn’t have thought I’d be competing in something like this.”