The association between being active and living longer

The more active someone is, the less likely they are to die prematurely, even when body mass, smoking and diet are taken into account, a new study has found 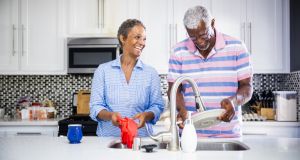 Any activity, no matter how modest, can reduce mortality risks. Photograph: iStock

Men and women who move around throughout the day, even if they just stroll or clean the kitchen and do not formally exercise, are less likely to die prematurely than people who hardly ever leave their chairs, according to a new study of physical activity and mortality.

The study, the largest of its kind to date, finds that any activity, no matter how modest, can reduce mortality risks, with some of the greatest gains seen when people shift from being almost completely sedentary toward rising and ambling for even an extra hour each day.

By now, none of us should be surprised to hear that movement and exercise are good for us. Many studies show links between activity and longevity, with more moving almost always tied to longer life spans.

A limitation of these past studies, however, is that in many of them, researchers asked people how active they had been in recent days or weeks, and most of us cannot accurately report how much time we spent sitting or completing gentle, everyday activities like cooking and cleaning.

Some of those past studies, however, did equip people with activity trackers to objectively monitor their days. But most of those have tended to be small or focused only on men, women or older adults, making their results difficult to interpret for the general population.

So for the new study, which was published in the British Medical Journal, an international consortium of researchers decided to find, combine and reanalyse as much data as possible from earlier studies that had provided volunteers with activity monitors. To start, the researchers turned to online libraries containing studies about exercise and longevity during which volunteers wore accelerometers.

Out of dozens of studies, eight passed the researchers’ strict criteria for methodology and reliability. Those eight studies used slightly differing statistical methods and definitions of what constituted easy or moderate exercise and activities, though. So, the researchers contacted the authors of these studies and asked if they would reanalyse their original data, using standardised statistical methods and activity definitions.

They did, and the researchers now wound up with data covering 36,383 middle-aged or older men and women from the United States, Britain or Europe who had worn an accelerometer for several days. The data also covered each participant’s general health, body mass, smoking history and other life aspects.

The researchers also had information about participants’ deaths. Each of the eight earlier studies had followed people for an average of about six years, checking their names against national death records.

Now, to tease out the links between how much people moved and how long they lived, the researchers divided the 36,383 men and women into four categories.

People who sat for long hours and hardly ever formally exercised constituted the least-active group. Those who moved about for about an hour more each day, even if their activities were not taxing, made up the second-least-active group and so on.

The researchers next compared activity levels and mortality and found, to no one’s surprise, that the men and women who were the most active were the least likely to have died. That group’s risk of premature death was about 60 per cent lower than for the men and women in the most-sedentary group. More unexpected, people in the second-least-active group also were significantly less likely to have died than those in the least-active group, even though their activities consisted primarily of moseying, housecleaning, cooking or gardening.

Overall, the researchers found, someone’s chances of dying prematurely continued to drop the more he or she moved, up to a plateau at about 25 minutes per day of moderate exercise, such as brisk walking, or 300 minutes a day of light, gentle activity. Beyond that point, people did not gain additional longevity benefits, although their risks of premature death did not rise either.

The relationship between moving more and living longer remained strong even when the researchers controlled for body mass, smoking, diets and other factors and excluded data from anyone who had died during the first two years of the follow-up period, since they might have been inactive because of an underlying illness.

This was an observational study, and it does not show that being active causes us to live longer, only that the two are associated. It also looked almost exclusively at Caucasian adults.

But the findings are encouraging, says Ulf Ekelund, a professor at the Norwegian School of Sport Sciences in Oslo, who led the new study. They suggest that “all activity counts” in terms of reducing our risk of dying early, he said. “So, walk,” he advised. “Take the stairs rather than escalators. Use your bike if possible for transportation. Sit less, move more and move often.” – The New York Times