Rebound had gathered pace before rollback of lockdowns 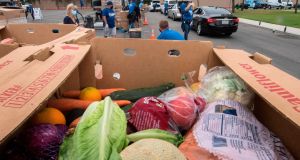 US employers added 4.8 million new jobs in June and the unemployment rate dropped to 11.1 per cent, as the economic rebound from the initial coronavirus shock gathered pace last month before the rollback of lockdowns.

The fall in jobless rate from 13.3 per cent in May was better than expected but was based on data collected in the second week of last month – predating a spike in infections that has hit several large US states since then and caused some authorities to reimpose restrictions on activity.

According to the Bureau of Labor Statistics, the job gains were broad-based, with leisure and hospitality recovering 2.1 million positions, retail restoring 740,000 people on payroll, and manufacturing adding 356,000 jobs.

Even so, the US has now clawed back only 7.5 million of the 22 million jobs lost since March. As happened in previous reports, the BLS acknowledged that a “misclassification error” was still distorting the results of its survey – without it the jobless rate would have been 1 percentage point higher on a non-seasonally adjusted basis.

While the number of people on temporary lay-off dropped by 4.8 million in June, one concerning trend last month was the rise of workers with permanent job losses from 2.3 million to 2.9 million.

A separate release by the US labour department showed that 1.4 million people filed for jobless benefits last week, highlighting the vast churn in the labour markets as many employers lay off workers even as others are hiring them back.

US Treasuries sold off following the data release, sending yields higher. The benchmark 10-year Treasury note yield was up 0.03 percentage points to 0.7 per cent, while the yield on the ultra-long 30-year note rose slightly more to 1.5 per cent. Shorter-dated Treasuries declined at a slower clip, with the more policy-sensitive two-year note falling less than 0.01 per cent to yield 0.16 per cent. Futures indicated gains in US equities, with the S&P 500 set to rise over 1 per cent at the start of trading.

“It was a solid number”, said Marvin Loh, senior global markets strategist at State Street Global Markets. “The economy is proving more resilient than certainly what was the worst-case scenario and a much more dire outlook just two months ago.”

But he warned that the current rise in coronavirus cases across the country could pose a threat to the ongoing recovery. “I think immediately we have to look past [the jobs report] and really consider what the impact is on this blooming next wave of the virus and the slowdown in activity in those states,” Mr Loh said.– Copyright The Financial Times Limited 2020