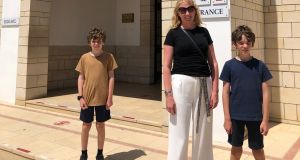 Our family was at the airport for a flight to Cyprus when the first case of coronavirus hit Ireland. Was it irresponsible to fly? Possibly, but if you see a fire, you run away, so we kept going.

There is a pleasure in living in a country where you can’t understand the media. Waking up to RTÉ in Ireland, we were pierced by a barrage of Covid arrows. Until we found the English-language Cyprus Mail, however, the news was all Greek to us and we revelled in our ignorance.

We were in Nicosia, Cyprus’ divided capital, when the first local cases were announced. Would we have been safer staying in Ireland? There were tensions at the disputed Greek-Turkish border near the hotel and, like most European borders, it closed. Thinking we were safer away from disputes, we moved west, to Kato Paphos, the “living archaeological site”. But it was dead, closing “temporarily” just before we arrived. It wouldn’t reopen for three months.

Checking in at the Paphos Breeze, we heard that package deals were being curtailed. Holiday reps with expressions clashing with their bright shirts were telling guests that their flights were brought forward. All hotels on the island were closing. The virus was taking hold.

We needed somewhere new to stay. We arranged an Airbnb for a month and moved in on St Patrick’s Day. We watched Leo Varadkar’s speech through the RTÉ app. This did nothing to ease our disquiet. Still, we figured this would be temporary so we entered a routine with lunch in the sun, beach walks and home school for the kids. They learned about Florence Nightingale and that air and sunlight prevented against the spread of the disease. Then, beaches joined airports and archaeological sites in the closedown. They didn’t open up for more than 11 weeks.

We had to text the government if we wanted to grocery shop. But the system wasn’t set up for overseas phones. We skulked out to get Cypriot sim cards, risking a €600 fine if we were caught. There was Skype Zumba, and we staggered virtually into Zoom pubs. The boys refused to use the cold pool but as the air temperature rose, they dived in. We read books “repatriated” from the book exchange in the Paphos Breeze. There was Sunday Mass on Facebook. We celebrated Mother’s Day, birthdays, our wedding anniversary and Easter in the Airbnb. For cousin Orlaith’s fifth birthday we arranged for a Zoom magic show, which family could watch in both Cyprus and Ireland.

The Airbnb booking ran down and we negotiated a lockdown rate for a seafront villa. Quarantine stage two. Mornings started with tea overlooking the bay and Rising Time on RTÉ radio. Breakfast was on the patio. RTÉ’s Home School Hub introduced Múinteoir Clíona to the boys. After lunch we texted the government and took walks along the path at the base of our villa, with the forbidden beach just a hop away.

A sirocco blew in. This is May, what happens in August? The pool guy told us not to believe the weather forecasts; workers are sent home when the temperature passes 40 degrees, so the government thermometers are likely near an open fridge in an air-conditioned kitchen.

Lockdown measures relaxed. We could now text for our government-mandated walk up to three times a day. More fishermen were on the outcrops. The pool guy announced that we were free. Maybe, but the airports were still closed.

Then, cases dropped to zero and the government lifted restrictions. We re-engaged with the outside world. We visited a monastery where monks dug cells in the limestone for their own lockdown.

We foraged for books, but shops implemented their own restrictions. Few tasks are more difficult for an eight-year-old than putting disposable gloves on hands desiccated by sanitising alcohol in 30 degrees heat. Only four customers at a time were allowed in a bookshop double the size of a Dubray’s. Once in, we were barred from sections with other browsers. The next book search was on the Kindle.

We went back to Nea Paphos Archaeological Park the day that it reopened. We were the only visitors to this Unesco World Heritage Site, feeling like the Beckhams must have on their private tour of the Palace of Versailles last year.

So now it’s the end of June, and at the time of writing there have been no new cases for three consecutive days. By the end of lockdown, Cyprus had tested more of its population than virtually anywhere in Europe, and less than 1,000 cases of the virus had been found. Life has returned. Temperatures rarely drop below 25 degrees, there are €2 beers in the bars and the beaches are open again. But we are four months in Cyprus and it’s time to move on. We have tickets home, but they may yet be cancelled. No one admits it, but we all hope they will.