The niggling question of every parent - how do you get the kids off screens?

Give Up Yer Aul Screens: Minecraft was no match for Project Runway family edition 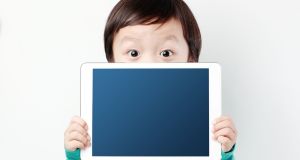 Give Up Yer Aul Screens is a summer series in which Irish Times writers share their experiences of the challenge of reducing screentime. Get involved here

It’s the question niggling at every parent of my generation: how do you get your children off their screens? In my house, we’ve tried relaxed self-regulation; strict, top-down governance; signed mutual codes of conduct; lectures on the psychological effects of screen-time addiction; threats; old-fashioned bribery.

My children – aged 12, 11 and 5 – are still touchingly quick to forsake screens for a whole family activity, and they’ve yet to meet a board game that doesn’t trump Minecraft.

Ironically though, it was a Netflix binge that gave birth to one of our more successful screen-free Saturdays. We had just finished our way through seasons 7 to 10 of Project Runway, when I dreamed up our family Project Runway challenge.

For the uninitiated, Project Runway is a reality-TV show hosted by Heidi Klum, or Heidi Kloooom as she’s known in my house. It takes 10 aspiring fashion designers, sticks them in a house together, and subjects them to a series of challenges such as “make a catwalk-ready look out of your bedsheet”. There are the obligatory tearful back stories, bickering, and always one sweetly modest girl from Iowa who gets off to a promising start, before reverting an aesthetic that judge Michael Kors declares, disappointingly, to be “mother of the bride”.

The brief was simple: make yourself an outfit by repurposing things you can find around the house.

I should say at this point that we’re not a crafty family. Despite all of the genetic advantages in my armoury – my grandmother was a talented seamstress, my grandfather ran a successful gentleman’s outfitters, and my other grandfather was a wonderful landscape artist – the making-lovely-things gene seems to have passed me right by. I still have to finish the yellow gingham apron I’ve been working on since fourth year.

While there’s a certain relief in hitting your 40s and accepting that you’re not going to come close to living up to your genetic advantages, I was secretly hoping one of the three would emerge as the next Gianni Versace or Stella McCartney.

The family Project Runway challenge was a hit – even the husband got involved, fashioning a look that can only be described as 'possibly suitable for gardening in the dark'

The 11 year old was initially reluctant. “Wait. Is there a cash prize?” he asked, enthusiasm perked by the memory of the $100,000 at stake in the TV series. Never above a bribe, I decided on €5, and he was in. What 11 year old could resist being handed a pair of scissors and told to cut up some clothes?

“Make it work,” I told him, channelling Runway’s Tim Gunn. And he did. His Tom Ford-esque design involved cutting the collar off a white school shirt, and the legs off an old tracksuit, and pairing it with wooden beads, flip flops and sunglasses for a streamlined, off-duty surfer look. The 12 year old gave an old white t-shirt the Banksy treatment, using some spray paints and a stencil she designed herself. She teamed it with a cut-off pair of denim shorts in a look Stella McCartney would definitely have approved of.

The smallest got right into it, disappearing into her room and returning with a t-shirt someone had picked up on holidays, and a denim miniskirt. She drew balloons all over the t-shirt with a Sharpie, and painstakingly spelled out her name backwards. We cut out heart-shaped patches and I sewed them onto the pockets of the miniskirt. I’m not sure what aesthetic she was going for, but not even Michael Kors could have accused it of being “mother of the bride”.

The family Project Runway challenge was a hit with everyone – even the husband got involved, fashioning himself a look from a deconstructed check shirt that can only be described as “brave” and “possibly suitable for gardening in the dark”. Choosing the loser was easy – sorry husband – though ultimately, I couldn’t choose a winner. But even at €15, it was the best-value family entertainment we’ve had for a while.