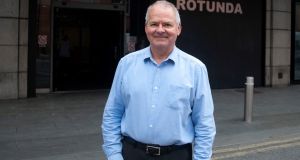 Les Corbett credits his “forever inquisitive” father for his own insatiable curiosity. When Corbett was 15, the pair made a car from the wreckages of two and, ever since, Corbett has been obsessed with how things work, how he can keep them working and how to fix them if they stop.

An unconventional career path has taken him from healthcare assistant to carpenter to mechanic to cardio thoracic nurse and, finally, to occupational health and safety, where he works now as health and safety manager of the Rotunda Hospital, Dublin.

Corbett is a pioneer of “process innovation”, thriving on cutting out time wasting and saving resources. His motto is: “If you don’t need to do it, eliminate it.” In his role, he collaborates daily with the hospital support services: catering; paging; IT; sterilising; building projects; household and linen. Linen was one of his first projects in the job. “When I started here 20 years ago, the hospital used linen shoots. Any floor could throw washing down these shoots, flying down stories into the basement where they were manually separated, bagged up and then sent out to the laundry.”

Time-consuming work. Corbett closed the shoots: “There was no rhyme nor reason to sorting other than that was the way it had always been done. If a sheet is soiled now, it is bagged and sent to the contractor to be cleaned.” Corbett reduced linen handling by eight times.

Some of Corbett’s innovations are things he notices, like the shoots; others are brought to his attention. The hospital porters spoke to Corbett about cumbersome trolleys, which were not fit for purpose. There was no standardised product and some were wooden. Corbett designed trolleys that have a large wheel in the centre, smaller at the outer edge and can spin and turn on an axis. For projects like this Corbett prefers to use local businesses and engaged a small Dublin engineering firm for the trolleys, once he secured budget approval.

Corbett’s most recent innovation is product focused. He spotted an opportunity in umbilical cord blood collection. Cord blood samples are collected for a number of reasons including blood typing, genetic screening, haemoglobinopathy screening, coagulopathy screening and sepsis screening. Cord blood is also a very valuable source of adult stem cells. These cells can be reprogrammed meaning huge potential for adaptation, already seen in research for treatment of heart attacks, strokes and diabetes.

One way to take a sample is that the umbilical cord can be clamped and cut. The section between the clamps is cut and a blood sample is collected. Corbett likens this to a messy “milking of the umbilical cord” into a paper towel-covered universal specimen tube, to catch the blood spill. The universal tube is labelled, brought to the lab where it must be transferred into a special blood collection tube – vacuettes – designed with anti-coagulates. Regulatory standards do not recommend this process.

The use of the universal tube first means you have a “sub sample” – not the original. This transfer can compromise the quality of the blood. There is also the risk of mislabelling in the lab, as the sample is moved from the universal tube to the new vacuette tube, requiring a new label.

Corbett took the universal tube as a size, he cut it and then made a funnel from suction pipe. Multiple iterations later he added “grooves” so that the funnel fits all vacuettes and lab tubes. His product is called the Umbifunnel. It is a class 1, non-sterile, single-use device. Umbifunnel’s design allows for the direct easy collection of cord blood into the appropriate blood collection tube. It is a more efficient process. The blood is of higher quality. There is no risk of mislabelling between tubes and the positive impact for stem cell collection is enormous.

There is one similar global competitor product, but it is far more expensive than the Umbifunnel and, much to Corbett’s disgust, requires training to use “unnecessary steps” – his biggest pet peeve.

So far, Corbett and the Rotunda have worked with local manufacturer Key Plastics to produce a small number of Umbifunnels. They are keen to start using the product and to market it. Their final hurdle to this is CE marking, a certification mark that indicates conformity with EU health, safety and environmental protection standards.

“The Umbifunnel is really just a simple solution,” Corbett says. “It’s intuitive, no training required and makes an important step in the blood collection process easy.”