New cataract theatres are a sight for sore eyes 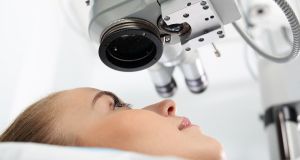 New dedicated cataract theatres in Nenagh Hospital and the Royal Victoria Eye and Ear Hospital are looking to take patients from other hospitals shortly.

Appalling, record-breaking waiting lists have become a ubiquitous feature of the Irish hospital system in the last five years. So much so it seems the public have become immune to hearing about one, two and even three year-plus waiting times for inpatient or outpatient appointments. Cataract operation waiting times have regularly been among the worst waiting lists in recent years, due to a variety of factors namely a shortage of consultants, increasing demand, pressure for the treatment of other eye diseases and regular cancellations of surgery in mixed use theatres.

Last year, The Irish Times reported how Irish patients, often very elderly, were increasingly availing of the EU Cross Border Healthcare Directive to have their cataracts treated in Northern Ireland and the UK after facing unacceptably long waiting times while their vision deteriorated and threatened their independence.

However, new dedicated cataract theatres in Nenagh Hospital, Co Tipperary, and the Royal Victoria Eye and Ear Hospital (RVEEH), Dublin, have reduced their waiting lists to below six months, and are now looking to take patients from other hospitals shortly, two of the consultants behind the units have told the Irish Times.

Consultant ophthalmic surgeon at University Hospital Limerick Marie Hickey-Dwyer explains how the unit in Nenagh Hospital, since opening last August, has gone from operating one day a week to four days a week by three consultants, including herself, from University Hospital Limerick, with hopes to have it running five days a week following the hiring of an additional surgeon.

“Because the theatre is dedicated no other types of cases are going on and no emergencies happen so the full list, unless the patient is ill or fails to turn up for some reason, is done and patients have their operation on the day. We are carrying out eight to 12 cataract operations a day, depending on the case mix, so roughly ten a day, forty patients a week. All the long waiters from Limerick.”

While cataract operations are still being carried out in Limerick, particularly more complicated cases that might need an overnight stay in the hospital, patients are now increasingly asking if they can be operated on in the Nenagh theatre if they are from that geographical area, she says. “The set up is state of the art, with a beautiful pre-operative waiting area that provides dignity and individual spaces and nursing and a completely modern theatre.”

The waiting lists for cataract operations in Limerick, previously among the worst in the country, have now been reduced to approximately four months, “which is amazing as previously it was two years”.

“Now for us the new pressure is to continue to be able to manage this as we will reach the end of our waiting list and will be available to help out other areas. At a national level moves are now being made to get contracts in place to offer surgery to patients from other hospitals,” Hickey-Dwyer says.

Prof Billy Power, consultant ophthalmic surgeon, RVEEH, and HSE clinical lead for ophthalmology explains how the Dublin hospital established its own dedicated cataract theatre in 2017, with funding assistance from the National Treatment Purchase Fund (NTPF), and has had similar success in reducing its waiting lists, with more than 2,000 extra cataract operations being performed last year, and a waiting list now of between four and six months.

Without dedicated cataract theatres, these patients frequently have their operations cancelled due to emergency cases, which causes the lists to increase. “When you a take a cataract out the vision is still there but you can’t let a person with a tumour or whose retina has detached or has had trauma injury hang around for three months or a year so what happens is your time gets eaten up with these cases, while the cataract patients have to wait. In addition we are doing more retina surgery now for things we didn’t do ten years ago, which can be complex and time consuming,” says Power.

That increased demand also applies to cataracts as people are living longer and also want to continue driving and be more active than previously when they might have just put up with their cataracts and the consequential deteriorating vision. “Now they are minding their grandkids, or their spouses or whatever, and we are also treating cataracts at an earlier stage as people’s living requirements are different to what they were 20 years ago,” he says.

Both Hickey Dwyer and Power promoted the quality of life that cataract operations provide, saying “the benefits are huge”.

“Even in terms of reducing falls, cataract operations have one of the highest scores in terms of improving quality of life. And this is why you need dedicated theatres, ideally operating full time, as it means these patients are not bumped because of emergencies and also because everyone is doing the same procedure you can get a level of efficiency and throughput with ease that you don’t on a normal day, because it is very disruptive to do a cataract case, do a trauma case, a retinal detachment, a corneal transplant, and then another cataract. And it is also a much nicer experience for patients, as you are coming into an elective, calm situation, you remain dressed and get gowned up, and you can sit in a reclining chair in the recovery room afterwards, and you can plan your day - when you are told to come in at a certain time you can tell your relations to go and come back for you at a certain time. You are not coming into the chaos of the main hospital and waiting, hoping to get your surgery at some stage in between emergencies,” Power says.

While the new units in the Nenagh and Dublin have proven very successful, cataract waiting times remain very long in some other parts of the country. There is thus a significant need for at least one other dedicated unit in the south of the country where patients remain waiting more than two years, and frequently longer, for cataract surgery, Power acknowledges.

In addition, a further challenge is to tackle initial outpatient appointment waiting times, Power says, saying it was completely unfair that public patients diagnosed with cataracts by their GP or optician regularly have to wait up to two years for an initial outpatient appointment for assessment by a consultant and then be put on a surgical cataract waiting list while their vision deteriorates.

He said the Ophthalmology Clinical Programme is working with the HSE and NTPF to develop a plan so that these patients will go directly to cataract assessment clinics and onto surgical lists, thereby reducing their overall waiting times.

“We are now doing a pilot with the NTPF to filter out 500 long waiters on the outpatients lists that we know have cataracts and get them into our pre-op assessment clinics and get them listed for surgery, and bypass the long outpatient waiting lists.”

The longer-term solution to managing Ireland’s long ophthalmology waiting lists will be the reorganisation of eye care towards the community. The rollout out of multidisciplinary eye care teams who could take over a lot of the work currently carried out in the hospital system was outlined in the HSE’s Primary Care Eye Services Review report, published two years ago. The implementation of the plan has been frustratingly slow, with the Irish College of Ophthalmologists consistently advocating for it to be funded and rolled out.

In a positive development, however three of these multidisciplinary eye care teams, comprising of medical ophthalmologists, optometrists, orthoptists and nurses, are due to be set up in Dublin later this year (Grangegorman, Tallaght and Churchtown).