Taking steps so you may live longer

A study found a threshold for reducing the risk of premature death is 4,500 steps per day 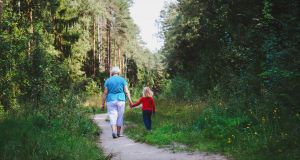 The study found a woman who reached the threshold of 4,500 steps per day was about 40% less likely to have died during a four- to five-year follow-up period than someone taking 2,700 steps each day

How many steps should people take every day for good health?

A new study of activity and mortality in older women finds that the total could be lower than many of us expect, and that even small increases in steps can be meaningful.

The study also side-eyes the validity, utility and origin of the common 10,000-step-a-day exercise goals built into so many of our phones and activity monitors, and suggests instead that any moving, whether or not it counts as exercise, may help to extend people’s lives.

By now almost all of us know that walking and other types of physical activity are indispensable to our wellbeing. Studies show that active people have lower incidences of heart disease, obesity and Type 2 diabetes, and usually live longer than people who are sedentary. But many of us remain confused about just how much exercise we need and how intense it should be.

Exercise guidelines in Ireland and many other nations recommend that adults complete at least 150 minutes a week of moderate exercise, such as walking. These guidelines are based for the most part on past studies linking the length of time people are active with their subsequent robust or poor health.

But some scientists have begun to suspect that telling people to measure their workouts in minutes may not be ideal. “People may not intuitively grasp what 150 minutes a week of exercise means in practical terms,” said I-Min Lee, a professor of medicine at Harvard University, who led the new study.

She says step counts are a simpler, more concrete and convenient measure of physical activity. We can understand the concept of a step and how to add them up. And, helpfully, many of us possess technology in our phones or activity monitors that will count our steps for us.

Yet few past studies have correlated steps and health, largely because such research requires people to wear activity monitors and not just tell researchers how often they exercise.

So for a new study, which was published recently in JAMA Internal Medicine, Lee and her colleagues set out to objectively quantify how many steps might be needed to avoid premature mortality.

Many of us likely assume that the answer is 10,000 since so many of our activity monitors use that threshold as a goal. But no scientific evidence supports that idea, says Lee.

The concept of 10,000 steps seems to have originated with a Japanese clock maker in the 1960s, she says. It gave its consumer pedometer a Japanese name that translates as “10,000 steps,” and somehow that ideal took hold. (Some past research suggests that we might need to take more than 10,000 steps to protect ourselves against heart disease.)

Now, aiming instead to use science rather than semantics, Lee and her colleagues began trolling through the massive data from the Women’s Health Study, which has been tracking the health and habits of older women for decades.

As part of that study thousands of older women had worn a sophisticated activity monitor for a week. It tracked the steps each woman took per minute throughout the day (but without showing any readout of the totals, so the women would not know or respond to the counts). The women also provided information to the researchers about their overall health and lifestyles.

The researchers gathered the step-count and health data from almost 17,000 of the participants, most of them in their 70s, and none of whom reported poor health. The scientists also checked death records for the subsequent four to five years and then compared step counts and mortality.

Those comparisons proved to be telling. The women who had moved the least, taking only about 2,700 steps a day, were the most likely to have died during the follow-up period. Women who moved more often had considerably less risk of premature death, up to a plateau of about 7,500 steps a day.

Meanwhile, the sweet spot for reducing the risk of premature death was about 4,500 steps per day, the data showed. A woman who reached that threshold was about 40 per cent less likely to have died during the follow-up period than someone taking about 2,700 steps each day.

“We were quite surprised that such a relatively small number of steps would be associated with such a substantial reduction in mortality,” says Lee.

The data also indicated that few of the women walked intensively; for the most part they strolled rather than rushed. Few walked for exercise. But intensity did not matter in this study. Only the number of steps per day was associated with mortality, not the speed with which the women accumulated them.

Of course, this study looked at older women and mortality. It is impossible to know if the findings apply likewise to men or younger people or to risks for diseases and other outcomes. The researchers tried to but could not completely control for the possibility that women who were weak or ill walked less and died early, with little or no relationship between their steps and their life spans.

Even so the findings suggest that step counts can be a useful way to measure exercise and that taking more steps is better than taking fewer, says Lee. – New York Times