Babies must think themselves magnificent creatures. Every time they show up, everyone smiles 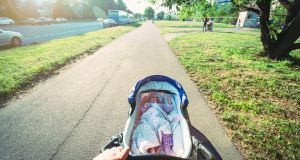 ‘I’m like personal security for a tiny celebrity.’ Photograph: iStock

Having your first child is like abruptly becoming slightly famous, at least to friends and family. You suddenly get invited to everything. Phonecalls and texts become more frequent. Every time you arrive into a room, relations seem actually happy to see you.

Sometimes, if there is a table of them, you’ll even get a little gasp of appreciation when you nonchalantly stroll in for Sunday brunch, with a little bundle of drool and devilment in your arms.

My daughter is now six months old and lately I’ve found myself thinking, this is what it must be like to be a reality TV star. Maybe with another child, I could start coining that influencer cache and before long I’ll be opening discotheques in Derrynane for cold, hard cash.

Of course, I’m not the reason my presence is required. I’m more like personal security for a tiny celebrity. I’ve often looked at bodyguards and thought, there’s an appealing job. You get a well-cut suit, in beautifully pressed black. There’s the fancy earpiece and codewords to learn. And then there is the luxury of having to use just one stony facial expression all day. But it wasn’t until I had a child to tool around that I began to understand how they must feel on a daily basis.

Every time I now enter a room alone, I can feel people’s hopes rise and fall. They peer around me anxiously or look over my shoulder, hoping to see someone smaller and more interesting. “Is the child not with you?” comes the feeble question, before I’ve even managed to take off my coat.

I had this in mind recently when I went home for a family funeral in Dundalk. Getting out the door took the usual extra hour, which made me more than a little late. My wife was sick in bed so it was just the two of us, haring down the M1 to try to be on time for a mass in St Patrick’s Cathedral.

The funeral clashed with my daughter’s bottle time, so while the procession through the town filed into the cathedral, we sat in the front seat of my car and my daughter did her best to suck her bottle inside out.

Just as we got to the vestibule, a certain smell hit the air that even incense and candles could not cover, so I made a run to a local bar to change her at speed. When we did make it in, she seemed to have the time of her life. Between flickering candles, the stained-glass light and walls that seem to go up forever in the biggest room she’s been in, her head was in danger of swivelling off her neck.

Off she went, being passed around like happy, precious currency, bouncing a little light around with every
gummy smile

Later that day at a lunch in the Lisdoo, I was back in bodyguard mode. As soon as we arrived, everyone wanted a go. Unlike Kevin Costner though, I’m more than happy to give the mob what they want. Off she went, being passed around like happy, precious currency, bouncing a little light around with every gummy smile.

Babies must think themselves the most magnificent creatures in creation. Every time they show up, everyone smiles and pays attention. Like little despots, they are showered with appreciation, but this time the crowds are genuinely joyful. Their arrogance must be off the charts. That little gurgle in your arms is not a show of appreciation. It’s a demand to stupid human number one to bring that bottle, and make it snappy.

It’s lovely to be able to bring your baby to a place and feel the whole room warm up, but never more so than at a funeral. On this occasion we were sending off a 98-year-old relative, and it was one of those occasions that felt more like a grateful celebration of life.

As my daughter did her tour of the town’s knees, she was bounced along like a lovely little buttery ball of innocence, a bright bit of light on a day that’s slightly dimmed by death.

Even the stony faced security was charmed.

Could I go a whole year without buying any new clothes?
2