I love to belly dance. It makes you stronger and more flexible 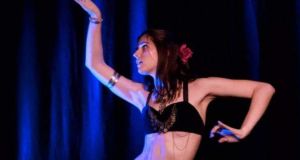 Deirdre Molumby: “My belly dance training consists of an hour and a half long drills and techniques class followed by combinations and choreography class for an hour”

I tried different dance classes at various points in my childhood including Irish dancing in primary school and jazz and musical theatre as a teenager.

Dancing was something I enjoyed and I could pick up choreography relatively quickly. I was also drawn to it over other physical activities as I never felt particularly sporty.

Over the years I’ve tried various forms of dances: ballet,which I wasn’t graceful enough for; salsa, which I felt was too partner-oriented; contemporary, which I bruised and battered my knees over; and even Zumba , which no, I’m sorry, isn’t really a dance.

Now I’m at a place where I feel like I’ve found my niche as I do hip-hop every Monday and belly dance on Wednesdays.

If you don’t get it right away, but love it, hold out because you’d be amazed at the leaps and bounds you’ll make

I’ve been belly dancing for the last five years now and it’s a dance form I truly love. I love how it not only improves your strength and increases your flexibility, but I also love how it welcomes every body shape. Even men can practise belly dance.

I enjoy the way the dance transitions from sharp, staccato movements to smoother, gooier ones – something it has in common with hip-hop.

The warm-up and cool-down are very yoga-oriented so I feel totally relaxed and stretched out after a session.

My belly dance training consists of an hour and a half of drills and techniques class followed by combinations and choreography class for an hour.

Similarly, hip-hop consists of an hour-long standard class followed by an hour-long performance crew training session which I began this year. I’ve taught a few classes in the former, subbing in for my fabulous teacher, Jasmin Victoria, but wouldn’t be ready to strike out on my own just yet.

For anyone thinking of trying out dance, I’d say it’s never too late to take up something new.

If you don’t get it right away, but love it, hold out because you’d be amazed at the leaps and bounds you’ll make in a matter of weeks.

Find your passion – the prowess comes after.