Peter Reid (12): ‘I’m going on strike from school today because of climate change’

Are We There Yet? Finding sharks’ teeth, coder dojos and canal walks 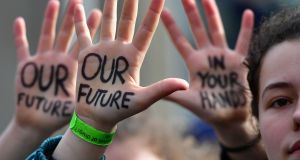 Peter Reid (12): I’m going on a school strike today to show that young people can do something about climate change. Sometimes there’s a feeling people can’t do anything. Most of my friends have said the strike is a good idea.

I’ve learned about climate change from my parents, from school and from the news. The story I hear is that it’s a big issue but we don’t have to do anything about it right now. I feel pretty bad about that message. If we keep going like this the world will only last for another hundred years or so, which really isn’t long enough.

I think adults switch off when they hear about climate change. A lot of the time it’s because they’re scared of it or they just don’t care. I’m a tiny bit scared of it. But if we do something about it there’s no need to be scared.

If someone tells me children should learn to follow rules I’d say the children won’t be around to follow the rules if they don’t do something about climate change.

My teacher is very good at talking about climate change. She’s very supportive about helping the children do something about it. She does a lot of what she calls rants. I find they’re actually quite interesting. Once she ranted for 45 minutes about the Great Barrier Reef. She told us people were going to it to say goodbye to it. Humans care about the animals we share the planet with, but not enough, not nearly enough.

That makes me a bit sad but I still have a sense of energy and hope.

I’ve stopped eating meat but I eat fish. I try not to buy plastic and anything with palm oil

I’m not sure whether striking from school is completely allowed but I think it’s important to do something because if we all do a little thing then the world will get a bit better. Some people my age understand that.

They understand that climate change is bad. But there’s no point in just being scared of climate change. People don’t want it to come but they’re not doing anything to stop it coming.

Changing things will make life a bit less easy but there are other options. You would have to cut down on meat. Because that’s one of the main problems. You can get an electric or hybrid car and that would fix a lot and you can get renewable energy for heating your house.

I’ve stopped eating meat but I eat fish. I try not to buy plastic and anything with palm oil. I try not to get my parents to drive me everywhere. If I can walk there I’ll walk there.

The school strike is definitely important. It’s one of the main things that children can do for climate change. I’m not entirely sure it has an effect but I’m hoping it does. I’d tell the people in charge that children can make a difference too.

Even if it rains we’re still going. I’m going to try to come up with something catchy and a bit funny for a poster. I find if it’s funny it sticks more. It can’t be too funny or else people don’t take it seriously but it can’t be too serious.

It’s time to start telling people the bad news but also tell them that they can stop climate change by cutting down on their carbon emissions.

In conversation with Catherine Cleary

Some things to do with children this weekend:

Bray-B shark?
Apologies for getting that earworm stuck in your head but the National Sea Life Centre in Bray, Co Wicklow is launching a quest for people to locate missing shark teeth. Become a Jawsome Ranger and help Prof Finn locate the large Play-Doh model shark teeth hidden in the tanks. As you hunt for the teeth, you’ll discover facts about different species of sharks. Once the trainee Jawsome Rangers have “qualified” you’ll get a special Play-Doh gift to take home and then move into the activity zone featuring a create-your-own shark model.
National Sea Life Centre, Bray, Co Wicklow, 10am-6pm. Online tickets adults €10.75, children €8.25, visitsealife.com

Creative drama for kids
If you have some natural show-offs in your house they’ll love these Sunday sessions which involve drama, games, improvisation and puppetry – both making and performing. These are fun activities that will help improve confidence and self-expression. My Art, City House, Newmarket, Dublin, Sunday, March 3rd, 12.30-1.30pm. To book email seventhland@gmail.com or visit myartdublin.com

Coder dojo
This popular coding and programming club is open for business this weekend. It’s free but all kids are required to bring their own devices to work on. It’s also important to remember that all children attending must be accompanied by a nominated parent or guardian. It’s all happening in the Star of the Sea parish hall, beside Star of the Sea Church, Leahy’s Avenue, Sandymount, Dublin 4. Saturday, March 2nd, 2-3.30pm. For more venues visit coderdojo.com

Johnny Magory and the Wild Water Race
“I’ll tell you a story about Johnny Magory” – this free, family-focused event aims to get kids outside exploring the wildlife, heritage and culture of the Grand Canal. The event will include a walk along the banks of the canal, a fishing demonstration, some healthy snacks and readings from The Adventures of Johnny Magory children’s book series. Lowtown Marina, Robertstown, Naas, Saturday, March 2nd, 2pm-4pm. johnnymagory.com