Can you do too much exercise?

Exercise can raise risk of arterial plaques while lessening the likelihood of death from heart attack caused by them, a new study has found 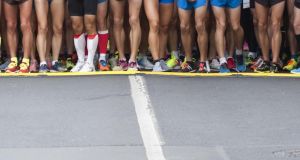 Extreme exercisers have less risk of dying prematurely than men with the same – or higher – calcium scores who rarely worked out, a new study has found.

Many middle-aged marathon runners and other endurance athletes are familiar with concerns from their loved ones – and occasionally their doctors – that they might be exercising too much and straining or harming their hearts.

For all of them, a large-scale study published recently in JAMA Cardiology should be mollifying. It finds that middle-aged men who work out often and vigorously do tend to develop worrisome plaques in their cardiac arteries. But those men also are less likely than more sedentary people to die prematurely from a heart attack or other cause.

The findings raise the interesting possibility, in other words, that strenuous exercise may protect the heart against the very problems to which it also contributes.

No one doubts, of course, that our hearts benefit from exercise. Study after study shows that people who meet the standard exercise guidelines, which call for about 30 minutes a day of moderate exercise, have a reduced risk of developing heart disease.

There have been some hints, however, that people can exercise too much, especially if the exercise is intense. In past studies, researchers scanning the hearts of long-time endurance athletes, such as marathon runners, have found scarring in those athletes’ heart muscles and also hefty deposits of coronary plaques, which can break free and block arteries, causing a heart attack. But most of those earlier studies were small and provided a single snapshot of the athletes’ hearts; they did not follow people for years to see whether their heavy exercise and any subsequent build-up of plaques was linked to heightened risks for heart attacks and shorter lives.

So, for the new study, scientists at the Cooper Institute in Dallas and other institutions decided to delve into just that issue. They also happened to have a useful trove of data readily at hand, in the health records of tens of thousands of people who had undergone examinations at the affiliated Cooper Clinic. Many of these examinations included scans of people’s hearts, along with detailed questionnaires about their exercise habits.

The researchers focused on the records of 21,758 men, most of them in their 50s. (They did not include women but plan to in a follow-up study.) They categorised the men into groups, based on how much they exercised. Those in the sweating-the-most group worked out vigorously for at least five hours a week and often more. The researchers used a mathematical measure (known as metabolic equivalent of task) to characterise the men’s workouts. But in practical terms, these extreme exercisers were doing the equivalent of running about six miles a day. A second group completed somewhat less exercise, and a third group finished less than half as much exercise each week as the most avid exercisers.

The researchers also looked at the scans of each man’s heart. The degree of plaque accumulation can generally be assessed using a coronary artery calcium score. Someone with a score higher than 100 is considered to have worrisome plaque build-up.

Comparing the groups, the researchers determined that the men in the highest-exercise group were prone to developing plaques. They were, in fact, about 11 per cent more likely to have a calcium score higher than 100, compared with men who moved less. Some of the extreme exercisers had scores above 800.

Finally, the researchers checked death records for a decade or so after each man’s latest examination, to see if any had died. And some had, particularly from heart attacks among men with calcium scores higher than 100.

But few of those men came from the group that exercised the most. The extreme exercisers turned out to have less risk of dying prematurely than men with the same – or higher – calcium scores who rarely worked out.

In essence, these results suggest that large amounts of exercise can up someone’s risk of developing plaques, while also lessening the likelihood that he will die from a heart attack precipitated by those plaques, said Dr Laura DeFina, chief science officer for the Cooper Institute, who led the study.

This curious outcome probably occurs because extreme workouts create a unique type of plaque, she said. “There is some evidence that the plaques” in highly active people “are denser and more stable” than those in sedentary people, she said, making them less likely to break free and cause a heart attack.

But that idea is speculative, she said, and requires more study. Scientists also are not sure how, at a molecular level, strenuous exercise might prompt the build-up of plaques, and why some people’s arteries remain unaffected, no matter how much they exercise.

DeFina and her colleagues hope to look into those issues in future studies. In the meantime, she said, middle-aged runners and other endurance athletes should pay attention to any heart-related symptoms, such as chest pain or shortness of breath, and talk to their doctors about the desirability of a heart scan.

The good news from this study, DeFina said, is that even if that scan should reveal a high calcium score, it appears that most people “safely can and should continue to exercise”. – New York Times