Why is it so hard to get farmers fit? The jogging and gym ‘stigma’ 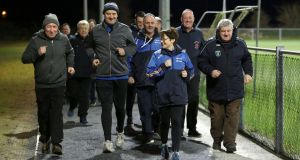 When Peter Naughton used to drive to the local filling station for his newspaper, he’d usually grab a breakfast roll as well.

The 55-year-old from Moore in Co Roscommon ate “an odd apple” but getting his recommended daily intake of fruit and vegetables was never even a consideration. As for getting exercise, the dry-stock farmer says he used to think “the men in white coats would be called” if neighbours saw him out walking the roads, given there were always chores to be done on the farm.

Until the death of his mother last summer Naughton was her full-time carer. Because she hated being alone, opportunities to exercise were rare.

“If I was only going to the shed she would want to come so I’d take the car and drive around to it. She would come with me if I was going down the field so we’d go in the car.”

Six weeks ago, Naughton and 24 neighbours signed up for Fit Farmers, a project started by Laura Tully, a nurse based in Athlone Institute of Technology, who is also a native of Moore and who decided in 2017 to help her neighbours get healthy.

Last weekend Naughton climbed Slieve Bloom. “I went up Slieve Bloom before but it was under car power, not Peter power,” he joked.

The farmer says his frying pan is now redundant except for when he makes an omelette, and pilates is one of his new favourite pastimes. In the six weeks he has lost more than eight kilos (18lbs), shed 10cm (four inches) off his waist and gone from “couch to 5k”, which he does in 43 minutes.

Tully believes rural people do not have the same access to health and well-being courses as their urban counterparts. She was thrilled when almost 200 people aged “from eight to 88” answered her call and joined the “Moore Movers” two years ago, but farmers were noticeable by their absence .

Determined to get them moving as well, she cajoled and scolded, got the blessing of the Irish Farmers’ Association, secured funding from Roscommon Sports Partnership and eventually recruited 25 men, aged from their mid-20s to their 70s.

Six weeks on, she says the results are amazing in terms of lifestyle changes, weight loss and general well-being. The fact that 24 of the 25 immediately signed up when she announced that there was to be another six-week course speaks for itself.

Tully says farmers will never “drive into town to a flashy gym” and the best hope of getting them motivated was by having opportunities on their doorstep.

David Kenny, also from Moore and aged “55 but feeling 45 now”, says there is still a stigma among farmers when it comes to taking time out for jogging or the gym.

“You’d see fellows with woolly hats pulled down over their heads so that nobody will recognise them if they are out running,” he says.

Tully says that normalising a healthy lifestyle is very important when it comes to at-risk groups such as farmers . Research published by the Irish Heart Foundation (IHF) in 2015 showed that 80 per cent were at high risk for heart disease and stroke, while 86 per cent were overweight or obese. Almost half had high blood pressure, and the same proportion had high cholesterol.

Kenny used to grab a bar of chocolate if he didn’t have time for lunch. With a mother and father in their 90s, three college-going children and an off-farm job, time was precious. Having suffered a broken knee when he was kicked by a cow last year, he was unsure of his exercise options.

The key to the Fit Farmers programme, which Tully believes should be replicated around the country, is that it has experts giving workshops on exercise and nutrition to ensure no one does anything risky.

Diane Cooper, a clinical exercise physiologist with a PhD in health and weight loss who works with fitness instructor John Bolton, says warm-ups and stretching are crucial. Having brown bread rather than white bread and thinking about portion sizes are among the basic nutrition tips she gives.

Each farmer gets individual attention, not least Seán Duignan (61) from Drum, Ballydangan, who last year had his left leg amputated following circulation problems. “Seán had to sit down for the exercises when we started but he now stands and has made amazing progress,” says Cooper.

Duignan was one of the proudest of the 25 when he walked up to collect his certificate at an end of course celebration in Moore hall last month.

“This changed my life,” he said. Before his surgery he was “always on the go”, working as a forklift driver and with a second job in a filling station.

In the last six weeks he has progressed from using a walking frame to walking sticks. “I feel safer now when I am walking. And I love getting out to meet the other lads.”

Kenny says the camaraderie has done much to lift spirits. “When you go out for the run not one person mentions Brexit or the price of cattle. It’s a great escape,” he says.

Marese Damery, health-check manager with the IHF, says the organisation is acutely aware that farmers are at serious risk for heart disease, and a new four-year study has been commissioned involving experts from Carlow IT who did the initial study. Health checks are being done in marts at 60 locations.

Pádraic Joyce, IFA Connacht chairman, who attended the prize-giving in Moore, said he recognised himself in the research. “I spend a lot of time on the tractor and the jeep. Farming also involves a lot of paperwork now, so there’s a lot of sitting down.”

Noting that stress is a serious risk factor when it comes to farmers’ health, he added: “I’d love to see a project like this rolled out around the country and because we have a branch network we could help to do it.”