‘I was told to avail of a hostel ... I didn’t feel I was that kind of person’ 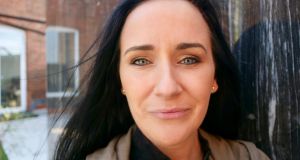 About 15 years ago, Fionnuala Kennedy’s life went into freefall: she dropped out of college without completing her performing arts degree, became pregnant, and at 21, separated from her partner when her daughter, Joanne, was just a year old. And that was merely the beginning: two dire years of homelessness were to follow for the young Belfast woman.

The next few years were extremely tough and often frightening – but they inspired the writing which has brought her success and renown as a playwright.

“[After the separation] I needed a base. I needed to build a life.”

Friends eventually advised her to “go and bang on the door” of the housing authority. “I went back and said I was desperate.

“I was told to avail of a hostel,” she says, adding that she was – ludicrously, she admits now– quite shocked by the suggestion: “I didn’t feel I was that kind of person.”

Fionnuala and Joanne stayed in a hostel for just under a year, and were eventually provided with a flat by the Housing Executive in Northern Ireland.

She was completely unfamiliar with the hostel environment world, but made friends and forged strong bonds while she was there, which helped see her through that period.

“It was a hostel for young families, but it was mostly mothers and babies,” she says, adding that in all, she was homeless for about two years.

Kennedy’s latest play Removed, which has its world premiere at the Belfast Children’s festival on Saturday, March 9th, focuses on the experiences of Adam, a man who has spent years in care.

It is partly inspired by her personal experience of homelessness and the social welfare system, but the primary inspiration for Removed are the voices of the young people in care who gave her their stories.

“The reason I wrote Removed and my first play, Hostel, was because when I was living in the hostel I felt like I had lost autonomy; that I had lost the ability to have any kind of say over my life and future in a system that is designed to support people,” she says.

“I understand the feeling of not having control over my life.”

For Removed, Kennedy spent six months interviewing 20 people aged from their mid-teens to their early twenties – all in care across Northern Ireland. She made contact with them through Voice Of Young People In Care, an organisation which advocates for young people with care experiences and campaigns for changes to the care system in Northern Ireland.

“They had different care experiences; foster care, kinship care, residential care, children’s home facilities,” she says, adding that some of the stories she heard are woven throughout the play. “I came away feeling that the system is incredibly difficult, but the resilience of these young people and how they were able to articulate their stories was incredible.

“I think my own experience of homelessness helped me connect with the young people, but I don’t think anyone can ever understand the care system unless you’ve lived in it.”

There’s often a knee-jerk response to people in care and the assumption that they are troublesome, or have done something bad to end up in the system

The play is dedicated to the “extraordinary, resilient young people” who shared their stories with her.

“As a writer I’m interested in the structures of the state which are designed to help and support people, but which also limit people and have a negative effect,” she says, adding that there’s often a knee-jerk response to people in care and the assumption that they are troublesome, or have done something bad to end up in the system: “I think the judgements placed on young people in care are unbelievable.”

“I heard first-hand about the judgements placed on them because of circumstances not of their making, and of the lack of support and understanding from people within our communities and the system.

“I hope Removed helps raise awareness and is a testimony to Voice Of Young People In Care.”

Following its run in the North, she’d truly love to tour the play in the Republic, “given the publicity around the homelessness problem there and the story about children sleeping in a garda station”.