Coping with the after-school meltdown

My exhausted child’s tantrum after a day in junior infants is best sorted with a hug and a snack. Spare me the negative label of ‘After School Restraint Collapse’ 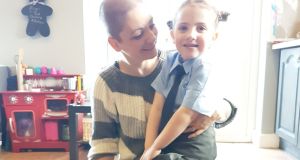 Geraldine and Allegra Walsh: “Come mid-afternoon, after school, the kids have hit the proverbial wall. They’re tired, exhausted even.”

If someone could please tell me where the kill switch is on my kid’s moods, that would be great. It would make Monday to Friday afternoons that little bit easier. Helping my kid understand and feel her emotions is a very real part of growing up, but we’re in new territory here, with our eldest having started junior infants last September. A whole new world has opened up to her, with new demands, new faces and new rules. It’s exhausting her and having an effect on her behaviour.

I can see the mental overload perfectly written on her face, dancing through her limbs and burning somewhere in her chest as the day doesn’t end quick enough for her. She turns from being my fun and happy little girl, as she whirls through the school gates at 9:15am with her pigtails flopping from side to side, to a physically drained and mentally spent kid who switches to attack mode once those feet bound across our threshold. Attacking Mum is a young child’s prerogative when they’re only learning how to manage their emotions. And it’s usually sorted with a hug and a possible sugar fix.

It’s almost as though she is on overdrive once the schoolbag is down and the uniform is nestled in a creased lump in the corner of the room. In an effort to expel this intense extra energy, which seems to have been bubbling away under her school tie all day, she may become unreasonable, emotional or the antagonism is turned up to 11. It may not last long, but it has a strong effect on her until I hug her gently with a reassurance and acceptance which she seems to need, and I want to give. A sandwich, and a biscuit after, usually gives the green light to my happy little girl returning, as the strain of her school day dissipates.

I wondered if this behaviour was to be expected when the school day ended. Or was I simply forgetting how hard my own school days were and how much my mum’s fairy cakes were needed after the school bell rang and I quickly ran the short distance home to her. I’m not a baker. Fairy cakes are few and far between in our kitchen. I asked Dr Google for some insight into helping my kid with the after-school come-down and some reassurance that it was simply tiredness or mental overload. What I came across was a term coined by Canadian psychologist and parenting educator Andrea Nair. A distinctly strong term that labels our children with a sophisticated psychology which seems unnecessary.

“After School Restraint Collapse”, the phrase used by Nair, is not necessarily a bad way to sum up the strong need for support and comfort our kids have after a long day of being focused and well-behaved. It does, however, make this afternoon flop sound like quite an embedded and negative condition, with little to no leeway. Nair isn’t wrong to suggest this afternoon meltdown happens as a result of young kids, usually primary school age, attempting to hold it all together while at school, where rules and regulations often abound, even in junior infants.

Labelling it as a failure to remain restrained can be counterproductive, however. Children who may overhear their parents talking about their collapse and negatively focus on it may inadvertently put pressure on themselves to perform and meet their parent’s expectations, when being physically and mentally exhausted after school is simply natural.

Counselling psychotherapist Susi Lodola, says: “The emotional and physical transitions involved in starting school can be exhausting and stressful for children and I believe that having to behave a certain way in school is not the main cause why children are not ‘little angels’ when they come home from school. Adults coming home after a day in work will equally feel tired, but we don’t attach a label to this.”

Or maybe we do. I may now be a work-from-home mum, but I still hit the “3pm slump” as I used to when I sat behind my office desk and risked sneaking out for a takeaway coffee or snuck a few strawberry Roses from the peculiarly bottomless tin at reception. I find flicking the kettle on once I have the kids sorted almost essential. I’m a little worn by this stage and the 3pm slump tag nails it on the head but without the negative overtones that I am unable to cope with the levels of tiredness. I need a pick-me-up and perhaps that is what our kids need – and not a psychological dissecting.

Come mid-afternoon, after school, the kids have hit the proverbial wall. They’re tired, exhausted even. I try to think back to my first years at primary school with 30-odd kids firmly sat on small wooden chairs with red legs in a rich and vibrant world with stories, songs, exercises, learning and an intense social interaction. Being expected to behave and act accordingly meant the freedom and safety of being home with mum had an innate natural release of feelings.

After School Restraint Collapse is certainly a real occurrence, but let’s not label it in a way that makes our children’s behaviours overtly negative or characterised as a problem.

As Lodola says, “One of the reasons why I have a problem with labels is attaching a label on the child’s behaviour may lead to missing the opportunity to help a child find their coping mechanisms for dealing with difficult emotions.

“Children should be allowed to be tired after school – rather than labelling the tiredness, it is more important to help children understand their feelings, allowing them to figure out how to deal with their feelings and learn to cope. Poor behaviours provide great opportunities for care-givers to help the child learn to deal with emotions in a positive way. Children need to understand that it is okay to feel tired, cranky, angry or any other emotions and they don’t have to worry about being judged or labelled.”