Life, and Christmas, after giving up booze

No hangovers, more energy, looking and feeling better – meet the people who say quitting alcohol was the best thing they ever did 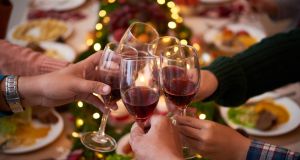 The festive season is upon us and with it comes the usual round of parties, late nights and general over-indulgence.

For many people, the Christmas holidays are a time to let their hair down, throw diet plans out the window and enjoy more than the odd tipple.

But while socialising and alcohol often seem to go hand-in-hand, there are others who don’t feel the need of a little bit of Dutch courage to strut their stuff on the dance floor with confidence – and not only will they be eschewing eggnog in favour of a festive mocktail, they say abstinence makes them feel healthier.

Helen Malone gave up alcohol two years ago and says she has never felt better. “I stopped drinking a couple of years ago as I had begun to realise that I was becoming a little too dependent on it,” admits the mother of three. “I would have a glass of wine, or two, every evening after work and then a bit more on the weekend. I never woke up feeling refreshed.

“I didn’t think I had a huge problem, but I was feeling bloated, my complexion was dull and I thought that I probably wasn’t setting a good example to my kids. So I decided to go off it for a while, just to see if I could do it and as I’m a bit of a control freak, once I started, I didn’t want to finish as I wanted to see how long I could do it for – it’s now two years later and I definitely feel and look better. It could, of course, be also down to the fact that I cut out the junk food I was eating when I was drinking, so I have lost weight and have a lot more energy.”

This is the second Christmas ‘on the wagon’ for the Dublin woman and while she is determined to stay sober, she says she does sometimes feel wistful when she sees her friends cracking open the bubbly.

“Last Christmas, I developed a tummy bug so it was easy not to be drinking as I felt pretty miserable,” she says. “But this year will probably be a bit harder as there are quite a few parties going on and I am the only one of my friends who won’t be drinking, so I might miss it a bit. But I will be the designated driver, so my husband will be happy and I know when they all wake up the morning after with a hangover, I will be the one feeling great.”

David Mooney gave up alcohol many years ago and also feels so much better. “I stopped drinking when I was in my late 20s as the weight of the hangovers started to outweigh the enjoyment of drinking,” he says. “I felt a huge change in energy as I used to feel heavy and a bit down after a weekend. I didn’t drink any more than anyone else, but I only noticed the effect it was having on me when I stopped drinking. I had much more clarity and gradually began to feel more positive in general.

“It was very liberating to wake up on a Monday morning feeling fresh – it was like gaining another day in the week. Once I stopped drinking, I wanted to be more active and started to play football on Monday evenings. I practise and teach an embodiment dance practice for the past 15 years and it is hugely liberating – I’m pretty sure I wouldn’t have found that practice if it were not for the fact that I stopped drinking.”

But while it’s not too hard to avoid alcohol during the week, weekends and, in particular, occasions such as Christmas can be difficult, so Mooney channelled his new-found energy into setting up an alcohol-free dance club.

“I found it quite hard in the beginning as most of my socialising at the weekend was based around going to the pub and on to a nightclub,” he says. “One of my best mates, Mick, also stopped drinking about the same time and we spent the first month or so not really knowing how to get the buzz of the nightclub and socialising with friends as we lost interest in being around alcohol when we weren’t drinking.

“So I set up an alcohol- and drug-free nightclub called Funky Seomra, which has been going for nine years. It has had about 40,000 attending over the years and has been a brilliant way to meet other people and know that you can have a proper rocking nightclub without alcohol.

“I also found other ways to socialise as there are more late-night cafes now and if there’s a really good DJ in a nightclub or gig I really want to see, then I go to it, enjoy it and leave about 11 or 12pm as it tends to get a bit less fun if you’re not drinking after that.”

Karen McCarthy is also off the booze this Christmas as she is expecting her first child – but while she knows alcohol is out of the question, she says she isn’t looking forward to the festivities. “I know alcohol shouldn’t determine whether or not you have a good time, but I do like having a glass of wine on the weekend, so I will miss that aspect this Christmas,” admits the Galway woman.

“I don’t drink a huge amount, but I am the last of my friends to have children, so they will all be letting their hair down at our work party and also at some other events and I will be on the water and most likely, the Pepto Bismol. So it will be a quiet one for me, but of course, it will all be worth it when my baby arrives and hopefully this time next year, I will be revelling in style.”

Whether or not she is back on the sauce next year remains to be seen, but for anyone who wants to have some good clean fun this Christmas, David Mooney says there are some great alcohol-free activities going on. “There is a brilliant dance practice called Movement Medicine which I go to myself and also teach,” he says. “It’s great craic, very liberating and loads of young people go to it.

“I’ll also be holding special Christmas Dance free events in December in Dance House Dublin and Glenageary - they are for anyone who wants to have a good dance without the booze.”

So whether you choose to avoid alcohol or have the odd glass, have fun and a happy Christmas.